Intersection to be closed at night to install new crosswalk 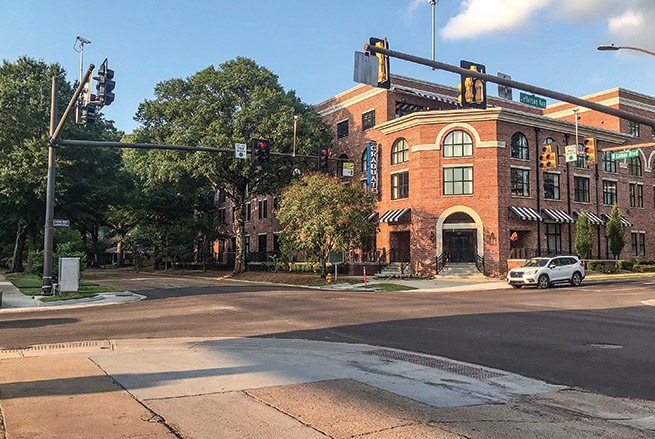 The city of Oxford will install a new cosswalk at Jefferson and North Lamar. (Jake Thompson, Oxford Eagle)

Jefferson Avenue was recently repaved following the construction of the new parking garage at the Downtown Square, and now, the road will get a new stamped brick crosswalk at the intersection of North Lamar Boulevard.

The Oxford Board of Aldermen approved a request to close the intersection for four nights next week, starting on Monday. The Board selected the second of three options provided by J.M. Duncan Incorporated, which city engineer Reanna Mayoral categorized as “not particularly desirable.” With ‘Option 2’ being approved by the Board, work will begin at 6 p.m. each night, and the intersection will re-open by 6 a.m. the following morning. This process will run through Thursday night.

The request for additional work hours and closure of the intersection was to “improve the quality of the finished product, reduce the overall delay and inconvenience to the public and eliminate interference with bus traffic,” according to a letter from J.M. Duncan to the city.

“We stressed to them that any option we do cannot have a road closed in the mornings for bus traffic,” Mayoral told the Board.

A stamped crosswalk gives the look of brick pavement, but does not require tearing up the pavement to install actual brick. Instead, a special material is placed on the asphalt, heated and then stamped to produce the desired look of a brick crosswalk. Work is beginning at 6 p.m. to allow the noisiest portion of the work to be completed each night before dark.

With school starting this week and school buses using Jefferson Avenue frequently to get to Oxford Intermediate School and other schools, the Board was against considering the third option altogether.