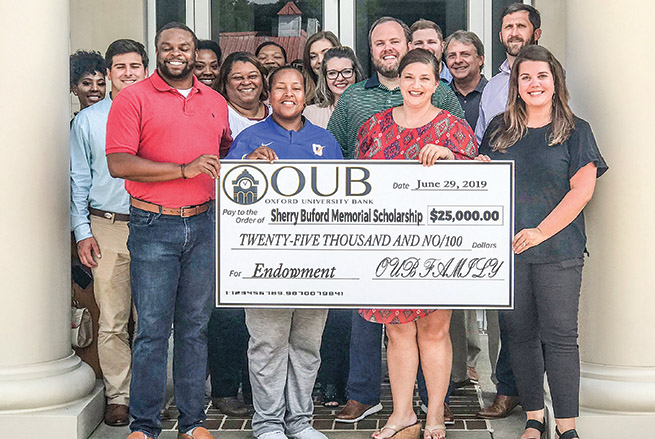 For the past five years, Oxford University Bank has hosted a charity golf tournament in the summer which was associated with the University of Mississippi Alumni Association.

This year, however, OUB decided to turn its charitable efforts toward another local cause, donating $25,000 to the Sherry Buford Memorial Scholarship.

The tournament took place at the Ole Miss Golf Course and featured 200 golfers competing over the course of a weekend.

“We were looking to do something different and get a different group of people kind of helping with volunteering,” Gant Boone, vice president of OUB, said. “The turnout was great. We couldn’t have fit another golfer on the course and we get that almost every year.”

The scholarship was formed in honor of Buford in May of 2018 following the sudden passing of the Oxford Intermediate School teacher. While driving back home from watching her niece Shaniyah Buford playing basketball at Itawamba Community College, a drunk driver collided head-on with her vehicle in February of 2018. Buford died instantly while four others in the car sustained injuries. Sandra Phillips, who was a passenger in the car, succumbed to her life-threatening injuries earlier this year.

Buford’s death touched both the Oxford and Lafayette School District communities, which prompted Joanne McGehee and others to come up with a way to honor Buford. The Sherry Buford Memorial Scholarship Board was formed and a goal of $25,000 was set, which would allow it to roll into an endowment. The fund had raised $5,000 prior to the tournament and with OUB’s donation, the fund currently sits at $30,000.

Each year, a senior from both Oxford and Lafayette High Schools will be selected by a committee from each school to receive a $500 scholarship. The Board hopes to increase the amount money awarded or the number of scholarships awarded yearly as the endowment grows.