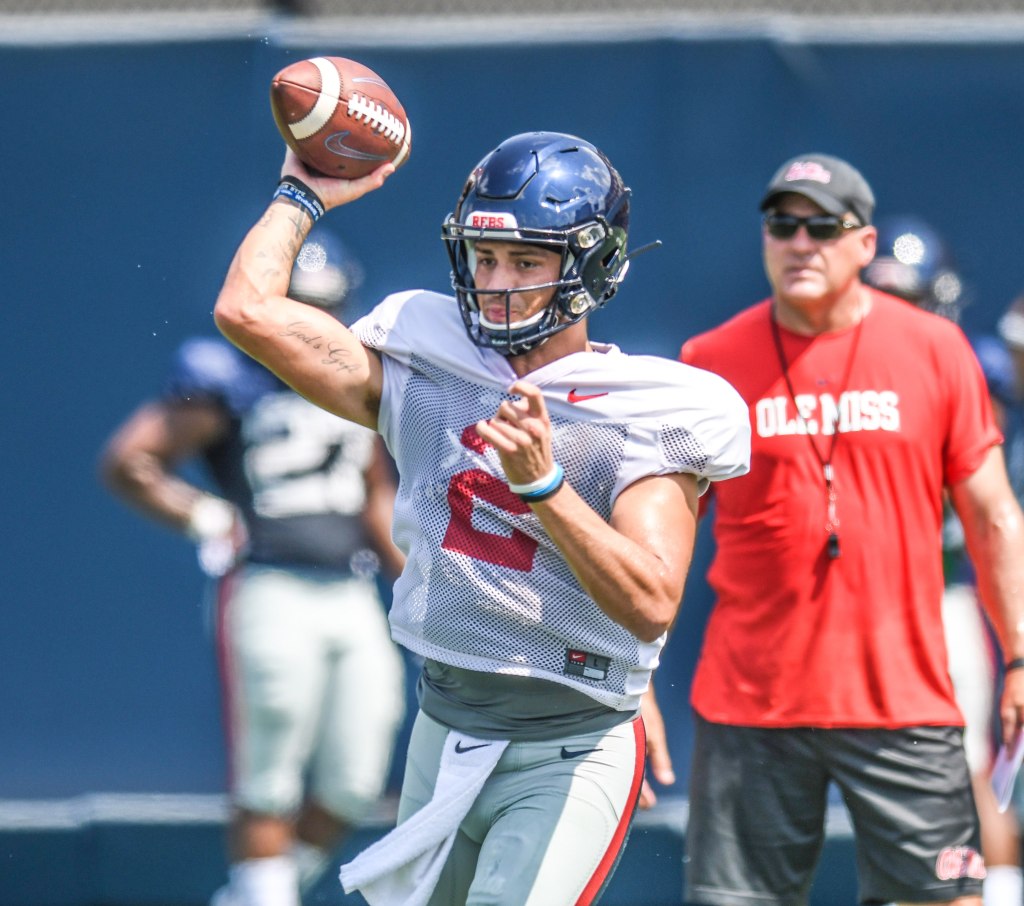 On Monday, Ole Miss held their fifth day of open practices for fall camp, but more importantly, the first full-team scrimmage of the fall was on Saturday.

It was closed to media and fans, but on Monday, head coach Matt Luke and some of the players spoke about the first scrimmage of the fall. These are their takeaways from the scrimmage, and some observations from Monday’s practice.

The scrimmage was sloppy, but that’s to be expected. Ole Miss ran about 100 plays on Saturday, somewhere in the mid-30s with the first team on the field.

“Overall a good day. The best thing is that you see flashes of talent. You just want to see more consistency when you do it over and over again. But that’s to be expected in scrimmage number one,” Luke said. “The tape is never as good as it seems or never as bad as it seems.”

For the quarterbacks, Matt Corral and Grant Tisdale were in non-contact jerseys. John Rhys Plumlee and Kinkead Dent were live.

Really, everyone relayed the same message: there was good and there was bad. But more than anything, there’s a lot this team needs to work on before they take the field against Memphis.

“It went well but we have a lot of things to work on,” Corral said. “Just the little things (we need to work on). Getting the calls as soon as we have a breakaway play and getting back on the ball. It’s knowing what we need to do just like that. And that’s what we’re trying to get to right now.”

Ole Miss broke some runs in the game offensively. Jerrion Ealy showed some flashes and Scottie Phillips had one nice, long run. Plumlee even had a touchdown run, where he got out on the edge and punched it in.

Another thing that just about everyone mentioned is how fast everything was moving. If there’s anything to know by now, it’s that Rich Rodriguez wants the team to play with speed, speed and even more speed. The team needs to work on getting faster to the line and faster to get the call from the sideline. Corral said plays were typically relayed in six seconds.

But this goes for the defense too. MoMo Sanogo said they need to be in better shape to combat that speed and that they’re going to try and pick up the pace even faster moving forward.

Defensively, Sanogo said they did a good job getting set and breaking on the quarterback. That said, the linebackers also dropped two, would-be interceptions.

Now to be fair, take all this with a grain of salt. Because of the nature of the closed-door scrimmage, literally anything could happen and the only thing anyone would know is what is being told by the team. That said, the team seemed relatively open about the events.

2. Even more injuries piling up

On Friday, Ole Miss disclosed that starting corner Jon Haynes and starting outside linebacker Qaadir Sheppard had been injured in the prior days.

Now, even more Rebels are on the injury report after Saturday’s scrimmage. Of the regular first-teamers, corner Jalen Julius , outside linebacker Sam Williams and kicker Luke Logan were new additions to the Rebels practicing in green, non-contact jerseys. Sincere David and Luke Knox were also in non-contact jerseys. Freshman quarterback Kinkead Dent was not in attendance after suffering a concussion in the scrimmage.

Jalen Julius is officially out with an ankle injury and Sam Williams tweaked his knee. The team didn’t seem too concerned about any of the new injuries, but time will tell how serious they are. After 10 practices and a scrimmage, it’s relatively typical of this time of camp to see some bumps and bruises.

In addition, inside linebacker Willie Hibbler left practice early due to an unknown reason. Add all the above injuries to the missing pieces from before, including safety Montrell Custis (recovering from an ACL injury last fall) and tight end Jason Pellerin (concussion protocol), and the injury bug has struck in Oxford.

Four-star junior college linebacker Lakia Henry was alongside MoMo Sanogo on Monday in the first-team defense drills. Both Matt Luke and Sanogo said they saw flashes from the newcomer in Saturday’s scrimmage. Sanogo conjectured he had maybe 5 or 6 tackles when he was out there. Ole Miss has had high hopes for the transfer, and it seems like he’s progressing quickly. When camp opened, Henry was on the third-team defense; now he’s working with the ones. In fairness, Hibbler was not on the field when Henry was out there with Sanogo and injuries are becoming a concern. This may have forced Henry into that role. Regardless, it seems like the linebacker is closer to becoming a factor than previously thought.