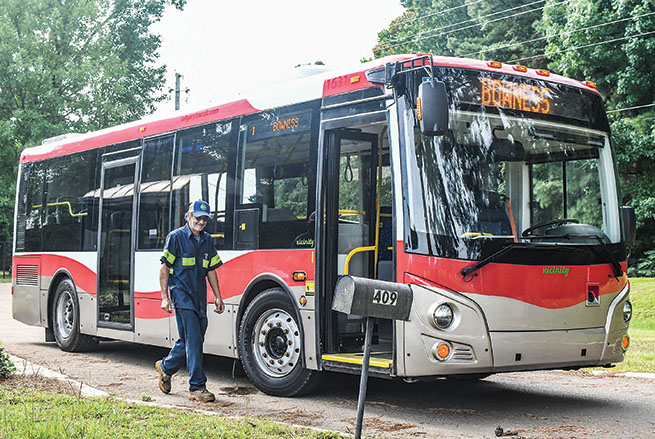 Oxford University Transit will be leasing several buses that have a different color scheme, in Oxford, Miss. on Friday, August 9, 2019. (Bruce Newman, Oxford Eagle via AP)

Oxford residents do not need to adjust their eyes while waiting at the bus stop – in the coming weeks, Oxford University Transit will have five buses that look vastly different than the ones residents are accustomed to seeing.

The buses are part of a lease OUT made with Grande West Transportation, a company out of British Columbia, Canada. They are on loan until OUT receives five buses they purchased from the company later this year. Five Grande West Vicinity 30-foot buses will begin servicing city routes once they arrive. OUT already has one of the buses in service.

“We wanted a 30-foot (bus) and ones that would be a little more accessible to kind of go through some of our roads that are kind of small to get through,” OUT general manager Donna Zampella said. “We are very excited about all the improvements and changes Oxford University Transit are going through.”

The city’s Board of Aldermen approved Zampella’s request to accept the buses, which are being leased at no cost to the city. The leased buses will be covering city routes, including Red South, Red North, Blue East, Blue West and Gray lines.

Once the buses OUT purchased arrive, which will have a blue wrap similar to the rest of its fleet, they will be used primarily for routes on the Ole Miss campus. The University paid the local match to buy the buses.

The buses were needed due to OUT increasing the number of routes they will be offering this fall, which begin on August 19.

For two months this summer, OUT offered free rides to citizens, and Zampella said they had 4,000 additional riders compared to the amount they had over the same period last year. This was part of an initiative Zampella started in an effort to get more Oxford residents involved in the transit system.

“It was a huge success,” Zampella said. “We were impressed. I feel like we’re getting our name out and people are realizing we are city and University (transit). So, hopefully we can get more people on our buses.”

OUT is also planning to launch a new website and social media accounts. Free WiFi is anticipated to be on all of their buses by this fall as well.