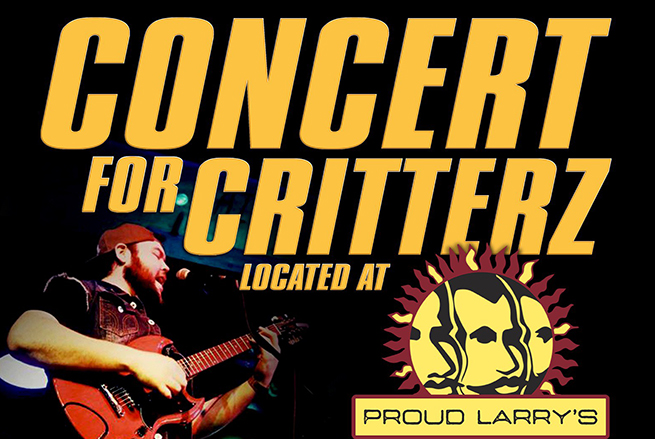 Oxford and Lafayette’s only no-kill animal shelter is holding its first fundraising concert at Proud Larry’s.

The inaugural Concert For Critterz will take place at Proud Larry’s on Thursday from 8:30 p.m. to 1 a.m.

The show is being organized by Mike Watkins and will feature music by Southern Groove Redemption, Silas Reed, Keith Sanders and Bill Perry. Proud Larry’s is also serving as a sponsor along with Better Brands Distributing Co. and Tito’s Vodka, who will match the amount raised by the event.

Watkins, along with his wife Sara, has served as a volunteer at MS Critterz since January. The Watkins have taken in several pit bulls who were abused prior to arriving at the shelter. After seeing the hard work that goes into running an animal shelter, Watkins said he came up with the idea of doing a benefit concert and asked some of his musician friends to lend their talents to the event.

“I have some really awesome friends in Oxford who happen to play music,” Watkins said. “It just all came together, and Scott Carradine at Proud Larry’s has just been phenomenal.”

MS Critterz took over the animal shelter last fall from the now-defunct Oxford-Lafayette Humane Society. Becoming a no-kill shelter has caused shelter organizers to need more resources and even find means to transport animals to other parts of the country where they can be adopted out quicker than in Oxford. All of those needs require money, and Watkins said he just wants to do his part to help them out.

“We truly believe in our mission to save the homeless and unwanted animals in Oxford and Lafayette County,” Bekah Chapman, who works at MS Critterz, said.  “In order to do that, we need the support of our community; whether it’s fostering a mama dog and her puppies, doing laundry and dishes, driving a rescue transport or spearheading an event like ‘Concert for Critterz.’ Our volunteers are the lifeblood of our organization. We consider ourselves so fortunate to have someone like Mike Watkins on our team.”

Cost for the event is $5 and Watkins said they will also be taking donations throughout the night.