The Pantry’s lease renewed for 10 years 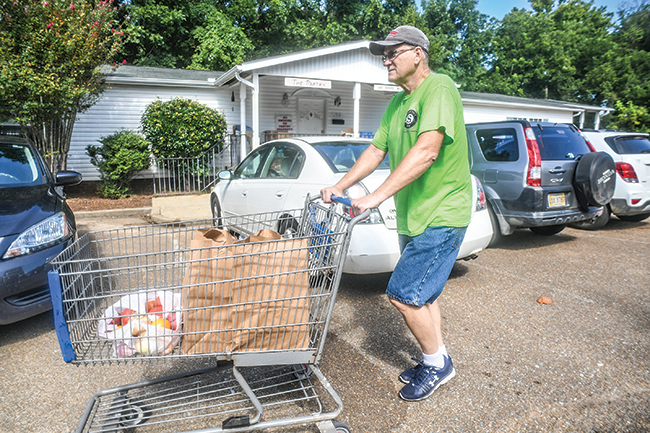 Steve Dziduch helps a client with groceries at the Pantry, in Oxford, Miss. on Wednesday, August 14, 2019. (Bruce Newman, Oxford Eagle via AP)

Oxford’s food bank, which has helped provide food for families and residents in need for over 20 years, won’t be moving anytime soon.

During a meeting last week, the Board of Aldermen approved a request to renew The Pantry’s lease for 10 more years, allowing them to remain in their current location until 2031. The food bank’s current lease expires in 2021. It’s the organization’s original 20-year lease, agreed upon when they donated the land to The Pantry at no cost in 2001.

After the two buildings The Pantry was using were set to be demolished and new structures built for different purposes, they were offered a double-wide mobile home to their specifications by Jon Bostick, who owned the Alabama-based Sunshine Mobile Homes.

The approval comes a year after the request was originally made by The Pantry. At the time, the City of Oxford was considering expanding the Oxford Police Department at their current location. The police station is next door to The Pantry’s location on Molly Barr Drive. Instead, the City purchased the old Hayakawa building on Industrial Park Drive, where a new police station will be built, bringing the option to renew The Pantry’s lease back to the table.

“With that being the case, (Mayor Robyn) Tannehill and the Board were a little more receptive to maybe giving us an extension,” John Kohne, director of The Pantry, said. “This provides us the opportunity now to do some extra work, if we can, to expand our facility.”

Part of the lease agreement is that The Pantry is responsible for maintenance and upkeep of their building and subsequent property. Knowing they now have 12 more years at their current location The Pantry would like to add “a small extension” to their double-wide trailer that serves as the food bank, Kohne said. The added space would house a walk-in freezer and refrigerator that would allow the distribution of frozen food that the United States Department of Agriculture (USDA) provides to organizations such as The Pantry.

“All of those frozen and refrigerated foods, if we’re going to take advantage of that and receive those in large quantities, we have to have some place to put them,” Kohne said. “We have to have a suitable availability and right now The Pantry has been living off of your normal, everyday stand-up freezer or stand-up refrigerators gained through donations. They’re already amply filled up with items.”

Currently, The Pantry is serving an average of 1,200 people per month. In 2018, they had 14,000 people use the food bank, who were provided a week’s worth of food during each visit.