Born in North Carolina in 1944, he grew fond of Mississippi and Ole Miss while visiting his mother’s parents during childhood. Walker transferred to Ole Miss in 1965, graduating in 1967 with a degree in business administration. 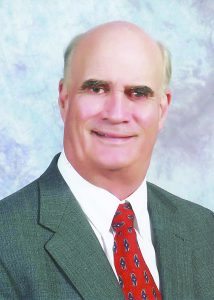 By 1970, he finished law school, and by 1972, he opened his practice on the Oxford Square.  Yet, he never ventured far from the University. Walker began teaching at the University in 1977, doing so until he retired in 2011 due to health reasons.

For a 10-year period from 1987 to 1997, he also served as the school’s public address announcer for football games in Vaught Hemingway Stadium.

The funeral service for Walker will be held be Sunday, Aug. 18 at 2 p.m. at Oxford-University United Methodist Church. A private graveside service will be held in Clear Creek Cemetery.  Visitation will be Saturday, Aug. 17 from 4:30 p.m. until 7 p.m. at Waller Funeral Home.