Juveniles arrested in connection with threat to Oxford School District

Two juveniles are in custody following a message that was circulating on social media Thursday night, regarding a threat against schools in the Oxford and Pontotoc School Districts.

The Oxford Police Department was notified by the Pontotoc Police Department around midnight regarding a text message that spoke of a “planned attack” on both school districts, according to interim OPD chief Jeff McCutchen.

In an email sent out to parents and other OSD recipients around 6 a.m. on Friday, superintendent Brian Harvey said the threat was immediately turned over to Donovan Lyons, the district’s lead school resource officer. Lyons and other investigators with OPD followed the lead overnight, and by around 4 a.m. Friday morning had identified and arrested the juveniles responsible for the message.

“We are happy to report that the juveniles have been identified and are in custody,” Harvey’s email read. “Neither of these students were Oxford School District students.”

A screenshot of the threatening message was posted onto an unofficial Pontotoc High School Facebook page between 10 p.m. and 11 p.m. Thursday.

“Hey kids we will be shooting up pontotoc and oxford schools also,” a portion of the message read. 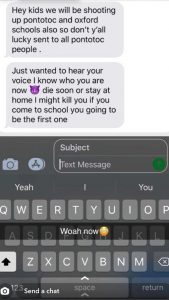 McCutchen confirmed the two suspects were not residents of Lafayette County. Both are being held at a juvenile facility in Tupelo and will be formally charged by both Oxford and Pontotoc’s police departments.

On Thursday, two schools in the Tupelo School District were placed on partial lockdown due to a threatening message sent by one student to another. Tupelo Middle School was placed on partial lockdown, as was Pierce Street Elementary School, due to its close proximity to TMS. Tupelo School District extended the lockdown for the remainder of the day on Thursday, but resumed normal operating hours on Friday.

McCutchen told The EAGLE that the two juveniles arrested were not responsible for the message that closed the TSD schools, but they were all connected in some way.