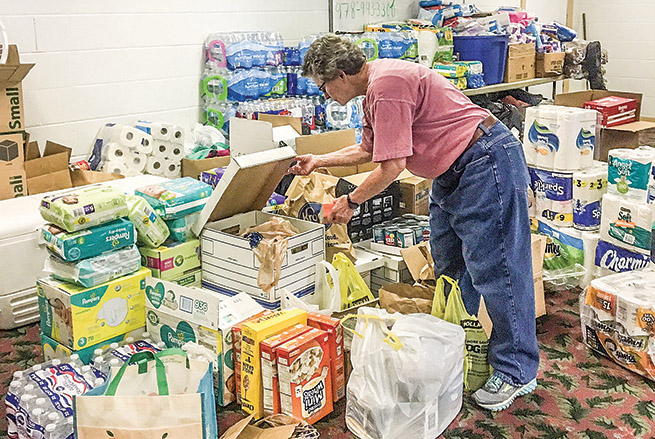 Pat Miller organizes some of the supplies in Forest, Miss.

Following the historic raids on central Mississippi factories by the Immigration and Customs Enforcement agency, hundreds of families were left with questions and in need of help. Gail Sutton and her wife, Pat Miller, decided to lend a hand.

Last Friday, Miller came up with the idea to fill a van with as many supplies as they could manage to provide a little relief to the families in Morton and Forest. Once the word got out about what they were wanting to do, the end result was more than the couple imagined. More than 110 people showed up at the Oxford Kroger parking lot on Tuesday evening to help load supplies.

A Kroger store manager also heard what was taking place just outside and donated bottles of water.

On Wednesday, Stratton and Miller delivered the supplies. One van and carload went to the Trinity United Methodist Mission in Forest, while another van full of supplies went to a location in Morton. Upon arrival, Stratton said people were there waiting for the supplies and up to 20 people were also waiting to receive food.

Last Wednesday, ICE detained 680 people in what is being considered one of the largest raids in United States history. A couple days later ICE released 300 of the detainees and allowed them to return home to their families. Despite the return of nearly half of those detained, there is still a massive need for supplies, food and other forms of help needed for those families.

“There’s at least somewhere between 700 to 800 families that have lost wage earners and that’s for the foreseeable future,” Stratton said. “I’m interested in learning what other organizations are doing. I think there’s some infrastructure growing to help provide communication between the different centers and I hope to be in connection with that. It needs to be organized and there is some organization. …Two vans and a car is nothing for 800 families.”

Stratton and Miller are open to donating more supplies or doing anything else they can to help the families affected.