Lafayette and South Panola prepare for 2019 season with jamboree 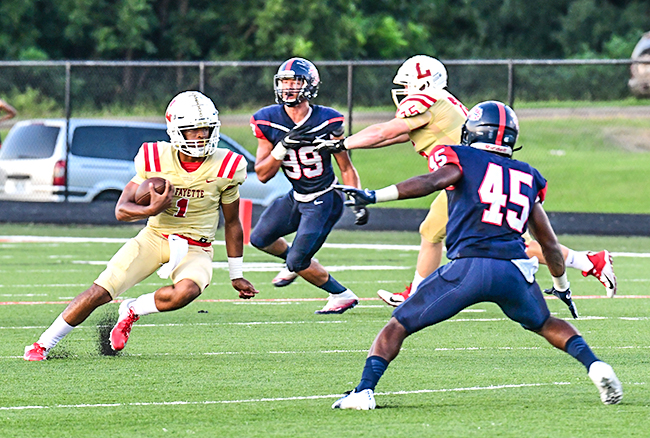 BATESVILLE — Michael Fair was not concerned with what the scoreboard said. That is not what Friday night was about for him. It was about seeing his team react against someone other than themselves for the first time this preseason.

While the scoreboard did read 14-0, in favor of South Panola at the conclusion of two quarters, Fair said he was pleased with what he saw following Lafayette’s jamboree performance at the South Panola High School Stadium.

“Everybody left last year and we felt real well after the jamboree and the thing is, sometimes you need stuff like this,” Fair said. “We got a lot of 10th graders out there and they needed this tonight. I think they responded the right way and the look I saw in those guys in that huddle right after the game is the look I wanted to see.”

With only two quarters of varsity play scheduled, there was not much time to get a full glimpse of what Lafayette is going to be capable of, but their offense did give a sneak peek.

Most of the plays went through Randy Anderson. The senior took snaps under center and out wide as a receiver. During fall camp, Fair was not shy with moving Anderson around, which will give defense pause in how they prepare for him.

In two quarters of play, Anderson racked up 56 yards of total offense. The majority of those yards came on the ground with 39 and 17 passing yards.

Anderson shared time under center with Tyrus Carmichael-Williams. The sophomore quarterback went 1-of-4 for 8 yards but showed off his arm strength with two deep throws on the Commodores’ opening drive that were nearly caught for touchdowns. Williams also rushed for 16 yards.

Another promising Lafayette drive was stifled when Tabias Brown fumbled away the ball inside the South Panola 30-yard line and the Tigers recovered.

“I thought (Williams) did good. He had a couple busted assignments but bullets were flying and things are different,” Fair said. “I thought he was very poised back there. He stepped up in pressure a couple times and made some plays with his legs. … I’m really excited about his process and the combination of him and Randy back there is going to be really fun.”

Defensively, the Commodores had trouble at time completing tackles. They never gave up any big plays, but South Panola managed to get a handful of yards at times and convert third and fourth downs in key spots of drives.

After a clean first quarter, Lafayette gave up the first touchdown of the game when Tiger running back Janari Dean scored on a 15-yard run with 9:07 left.

Nate Harris provided the final score off an eight-yard run with 30 seconds left in the jamboree.

“When you’re trying to tackle (Dean) he tests you,” Fair said. “What looks good in practice might not necessarily work out here when everything’s live and he’s running around. I thought we lined up well. Just a few missed tackles. Every bit of this can be cleaned up.”

Lafayette opens their 2019 campaign on Friday at Cleveland Central.

Chargers, Commodores and Blue Devils playing in jamborees this…