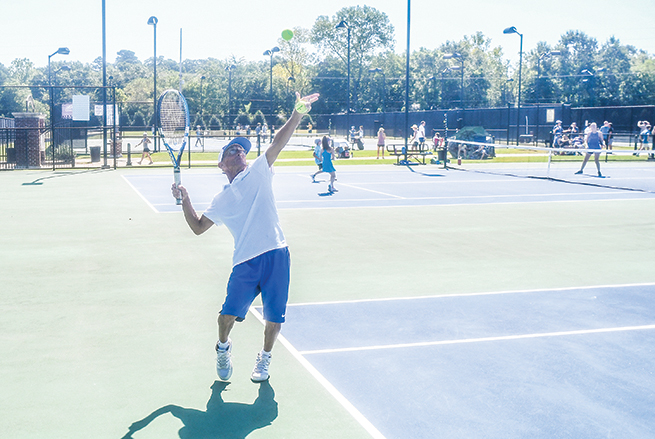 When Jack Ligon formed the Oxford High School group Students for Alzheimer’s, he wanted to help shed a light on the disease while also making a positive impact within his community.

In 2017, he founded the Students for Alzheimer’s tennis tournament, which held its third event on Saturday at the John Leslie Tennis Complex.

The first year the fundraising tournament went toward the Alzheimer’s Foundation, but after a visit to local organization Memory Makers, Ligon decided to focus his efforts closer to home. Over the past two years, the tournament has raised over $32,000 for the Oxford organization, which serves as a respite day program for caregivers and people suffering from dementia.

Saturday’s tournament raised over $17,500 after donations and final tallies from entry fees were counted. The round-robin format lasted for three hours on Saturday morning, allowing those who participated to play for however long, or short, they wanted while also raising money.

“It’s hard to describe the passion that they have come to us with and helped us with,” Jo Ann O’Quin, co-founder of Memory Makers, said. “It’s meant a great deal to me to work with them and see them come together around a cause that’s so important in our community.”

Members of the Student’s for Alzheimer’s group, which Ligon formed in January of 2017, spend one hour a week at The Blake assisted living facility. Ligon decided he wanted to do something different to raise funds for those with memory disorders. Being a member of the Oxford High tennis team, creating a tennis tournament seemed like a no-brainer solution. The past three events have proven the risk was worth taking.

“These last two have been the big ones,” Ligon said. “The first one, you had growing pains and all that. Now everybody kind of knows what it is.”

Ligon graduated in May and passed the tournament organizing and responsibilities to Carter Young, Downing Koestler and Brown Turner. Despite watching Ligon create and run a charity tennis tournament over the previous two years, there were still some challenges for the trio.

“I wouldn’t say (it was) easy. I learned a bunch of stuff this year, but Jack was a huge help,” Young said. “He came up with some stuff that I wouldn’t have thought about. I think thanks to him, Brown Turner and Downing Koestler we’ve made it as big as possible this year.”

Along with the tournament, a silent auction took place. Some of the items included pieces of pottery that were made by participants of Memory Makers.