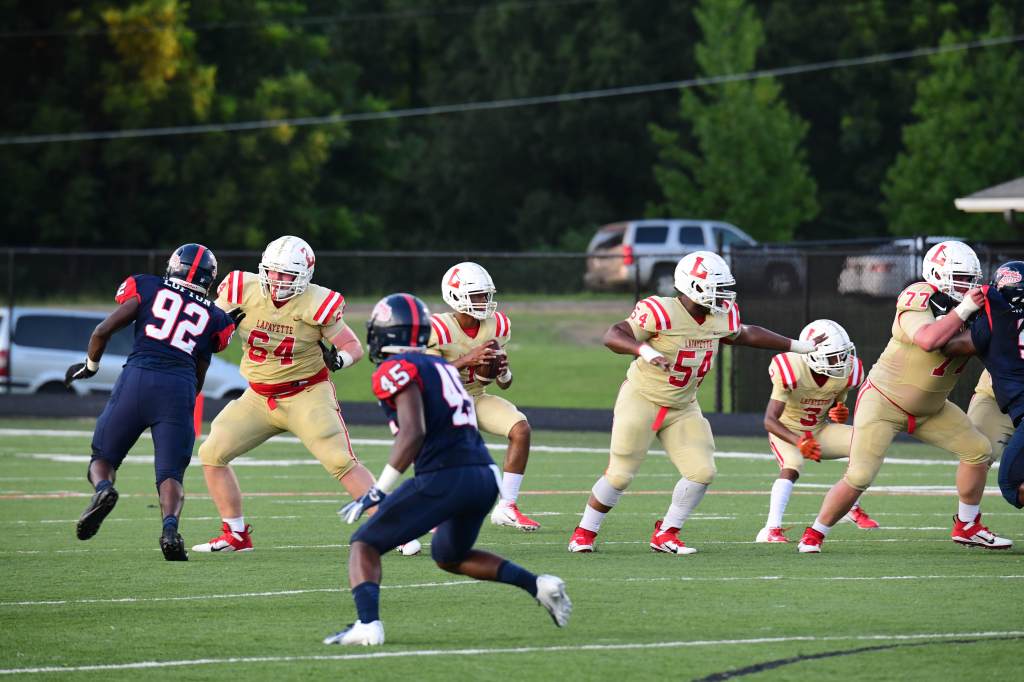 When the Lafayette football team lines up for new clothes and shoes and equipment, it’s not the quarterback in the front of the line, like in many places. It’s the big boys.

When a team has a former offensive lineman at the head of the program, they have a guy that appreciates and rewards the dirty work.

The 2019 Lafayette Commodore football team begins and ends in the trenches. If they’re going to be a team capable of a late playoff run, the Commodores are going to need to be a team that bullies opponents on the offensive and defensive front.

“We cater to those guys,” head coach Michael Fair said. “We treat linemen around here like a lot of people treat quarterbacks – we just do. And that’s probably because I was an offensive lineman myself.”

Lafayette returns each of their five starters from last year’s offensive line. Three of their four starters on the defensive line return as well. In high school football, experience like that, especially at a high level, is hard to find and impossible to simulate.

The team loses two 1,000-yard running backs from a year ago, from a team that went 9-4. It’s difficult to just replace that, but the team is confident that Xzavious Stokes and Issac Vaughn, two seniors, can step in without losing much. That confidence feeds from running behind an offensive line that has been there before.

“It’s great having us all here. We’ve been doing it since we were in seventh grade together and we have great chemistry,” senior lineman Dylan Christman said. “And those guys opposite us are real good, too. They’re definitely good, and it makes us even better just going up against it every day.”

Christman iterated how nice it is knowing he has a coach who understands how it is in the trenches and values that gritty mentality.

But it’s not just the offensive line that returns that experienced talent – it’s also the guys they go up against every day in practice. Lafayette’s two top defenders, in terms of bringing down opposing players behind the line of scrimmage, are returning from last year. Tavion Prather (9.5 sacks, 21.5 tackles for loss) and Keeton Hunter-McIntosh (4.0 sacks, 15.5 tackles for loss) are now seniors.

Lafayette doesn’t shy away from putting the two position groups against each other on a daily basis. In many cases in high school football, teams have one side of the ball that is much more talented than the other. For the Commodores, they truly don’t know who’s going to win the battle in the trenches every day.

“It’s huge. It really is. Experience on the front, on both sides, those guys have played in some of the biggest games in high school football. We got put out last year in the second round last year by a really good team,” Fair said. “But every one of those guys contributed. To have those guys back and know what it’ll take deep in the playoffs, it’s huge. We don’t take it for granted.”

The Commodores went nearly step-for-step in that second round game last season at West Point. A tie game entering the fourth quarter, the Commodores would lose to West Point 27-20. It was the only one-score game West Point played on their way to winning the 5A State Championship. With this returning experience in critical spots, the Commodores are confident they can be that team in 2019.