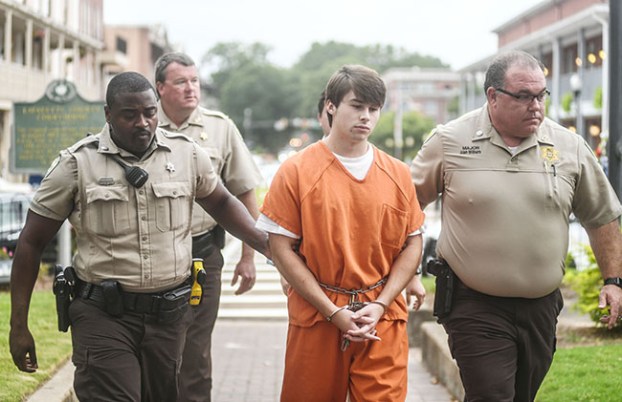 What was expected to be a lengthy bond hearing lasted only two minutes.

The defense counsel for Brandon Theesfeld made an announcement to the court of their intent to withdraw their request for a bond hearing due to “new information” gathered in the case. They also requested a psychiatric evaluation be performed by the Mississippi State Hospital. The prosecution was in agreement with both of the defense’s requests.

With the bond hearing withdrawn, Theesfeld will remain incarcerated. Tony Farese, co-counsel for Theesfeld, would not say where his client will be held. Farese did confirm that his client intends to enter a plea of not guilty.

“We received some new information (on Wednesday),” Farese said after the hearing. “We reviewed that information with Brandon, his family and the defense team. It was our collective decision that it was in Brandon’s best interest to withdraw a request for a bond at this time.”

There was not a time frame provided as to when Theesfeld would have the evaluation performed, which is expected to take place at Whitfield in Pearl. Whenever an order for an evaluation is given, there is a chance the process could be drawn out. Farese noted they have had issues with the hospital in the past regarding evaluations.

“We have problems at the state hospital. We’re backed up,” Farese said. “We will be one of many people waiting for an evaluation. Unfortunately, that is a problem in our system in Mississippi, but we’ll work through that and we’ll get in line they will get us evaluated as soon as possible.”

Thursday’s events do not slow down the State’s case when it comes to presenting before the Grand Jury. The final session in Lafayette County begins this coming Tuesday and runs through Friday. The proceedings of a Grand Jury session are confidential, but District Attorney Ben Creekmore said he expects to present the Theesfeld case next week. Then, the Grand Jury will decide whether to indict Theesfeld on the charge of murder in the death of Ole Miss student Ally Kostial.

Kostial’s body was found by Lafayette County Sheriff deputies on July 20 in the Buford Ridge area of Harmontown. It has been revealed by the coroner’s office that the cause of death was from multiple gunshot wounds.

“The investigation, as far as I’m concerned, it’s still on going. It’s not completed,” Creekmore said. “Hopefully, we will have enough to go ahead and present it to the Grand Jury next week.”

Following the hearing, Kristi Kelley, a cousin of Kostial’s, provided a statement on behalf of the Kostial Family.

“Ally’s family is deeply grateful for the prudent work accomplished by the Memphis Police, the Lafayette County Sheriff’s office, the Lafayette County Coroner’s office, the Ole Miss community and the many others who worked tirelessly over the past few weeks on this case,” Kelly said. “Our hearts go out to those touched by Ally’s positive spirit and passion for life who are now feeling sorrow. We pray for strength in the coming days and are thankful for the friends, neighbors, coworkers and many others who have supported us.”

The Oxford and Lafayette County School Districts have received high marks from a website called Niche, which recently released its... read more