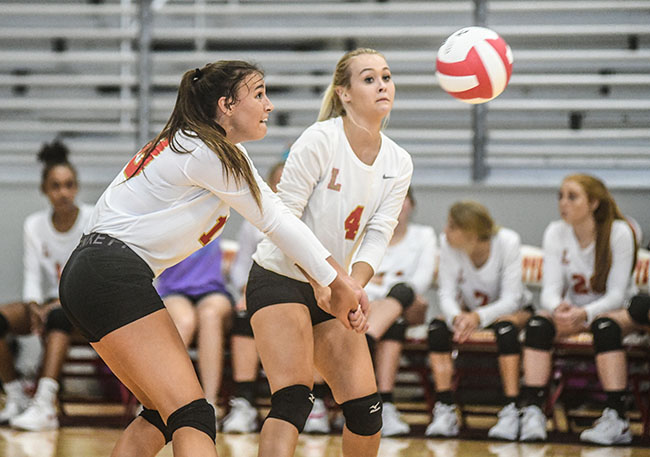 After a string of disappointments to open the 2019 season, Lafayette volleyball got things going in the right direction again on Thursday evening.

The Lady Commodores started the volleyball season 0-6. On Thursday night they picked up their first win on the short season.

Hosting a three-team round robin with Pontotoc and Cleveland Central, Lafayette looked the best they have season they opened the season against Oxford.

Lafayette opened the night against Pontotoc, losing in two sets 25-16 and 25-15. They then quickly bounced back two hours later, defeating Cleveland Central in dominating fashion, 25-11 and 25-15. The monkey is off the Commodores back.

“We have all the tools and it’s just about putting it together. That’s what it comes down to,” Lafayette coach Kelsie Pineda said. “It’s really good to see them put it together and celebrate and come out with a win.”

In the win, Lafayette was really able to capitalize on a string of runs. They fell down 6-5 in the opening set before putting together a 13-2 run to pull ahead. In the second set, up 11-10, they closed the evening with a 14-5 run.

They looked good in their opening night loss at Oxford, dropping the sets 25-19 and 28-26. Thursday night, they were able to put the pieces together from the flashes they showed in that opener.

“That Oxford game at the beginning was awesome. It gave us a lot of things to look forward to,” Pineda said. “But as I said it’s about the consistency. Against Pontotoc, we were doing some really good things. But we weren’t finishing. And with Cleveland we got the chance to finally finish. I’m really proud of them.”

Now with a notch in the win column for the first time this season, the Commodores get a little reprieve. They don’t play again until Tuesday night, at home against Caledonia.

Why Oxford can win state: the skill position players