Why Oxford can win state: the skill position players 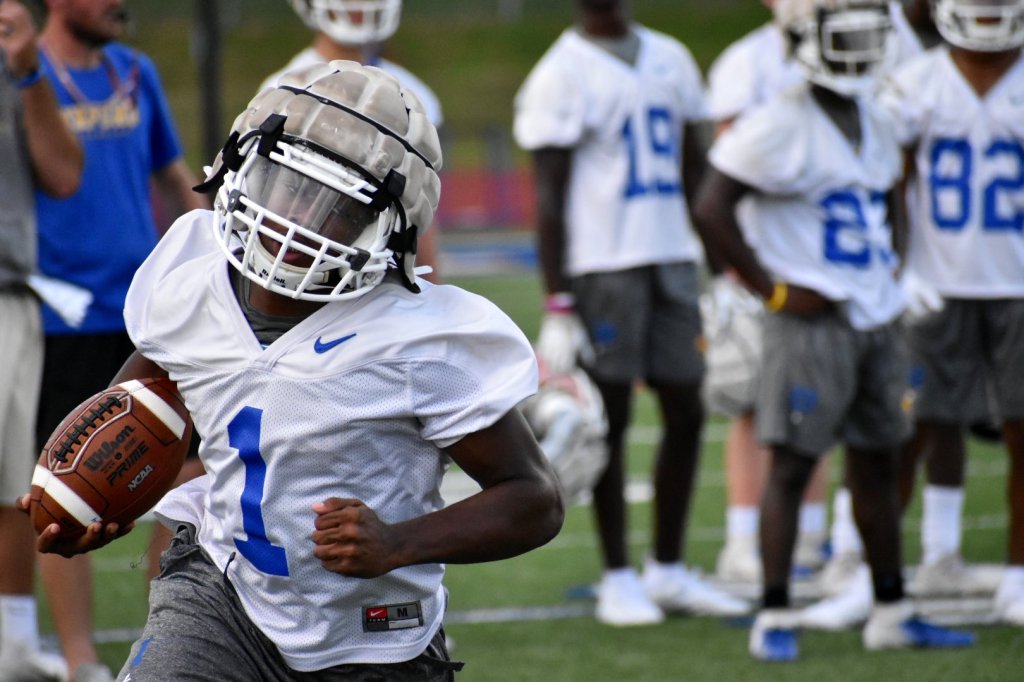 Derries Pegues takes a screen pass up the sideline in practice for Oxford football. Aug. 21, 2019 (Photo by Nathanael Gabler)

The 2019 Oxford Chargers have tasted the 6A State Championships.

Last year, their first bite left a bitter aftertaste, a slow burn that stuck with them all spring and all summer.

If there are lingering effects from that aftertaste, it’s only a positive driving force. Oxford returns a ton of experience from last year. If they’re going to get back, and make a serious push for the state championship belt, they’re going to need to rely on their talented skill position players who have been there before.

“It gives us a lot of confidence going in, compared to where we were last year,” senior tight end JJ Pegues said. “With all the success we had last year, then bringing back the same quarterback and same receivers, we know what all of us can do.”

Of their contributing skill position players from a year ago, Oxford lost just one player – DeDe Pegues, with 41 catches. Including this loss, Oxford returns five of their six top pass catchers and each of their top four rushers.

It’s an experienced returning class that includes senior quarterback John Meagher. Not exactly a skill position, but Meagher was Oxford’s leading rusher a year ago. And more importantly from that position, he has a ton of real-game experience and chemistry with his receiving core.

“It helps John a lot too. It helps in the timing and the passing game, certainly,” said head coach Chris Cutcliffe. “Really, it’s just confidence. They all have a lot of confidence in each other and they believe the other guys are going to get the job done. That’s big too.”

In a way, one of the best things about the Oxford skill position players is their versatility. Pegues will line up mainly as a tight end, but he’ll also see work at running back. KJ Wadley will be the team’s starting tailback, but he’s also capable of catching balls out of the backfield.

“We have some guys there that are really smart football players. They can do a lot of different things,” Cutcliffe said. “When you have guys that can do different things without having to change personnel, that makes you tougher to defend.”

And it’s not just Pegues. It really isn’t. There will be games this year where team’s look at Pegues and double-team him the entire game. There will be games where teams triple-team him on a few snaps. It’s relatively inevitable, but it’s not a problem. It’s so much not a problem that Cutcliffe leans into it sometimes – there will be games where Pegues is simply a decoy or a dummy to get others open. If anything, the double teams will just open up the offense by allowing easy throws or bigger running lanes for the rest of the returning players.

With all the returning experience, there is one relatively new face that will be expected to step up in 2019 among the Oxford skill guys: Omar Howell. A freshman last year, he carried the ball just 13 times in 2018, but averaged 8.5-yards every time he touched the ball.

Now a sophomore, JJ Pegues said he sees a lot of himself in Howell. They’re obviously different players, but the experience as a freshman and the increased role as a sophomore could see the power back break out in the 2019 season working behind KJ Wadley.

Oxford opens the year on Friday against Northwest Rankin. We’re really know just how good this team can be in week two, a trip to Starkville. But what we already know, is that this talented set of skill players is the key to the Chargers making a late playoff push in 2019.