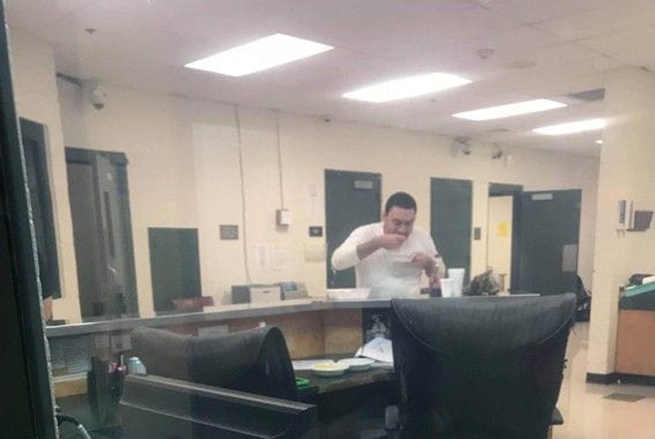 A photo showing Matthew Kinne eating unguarded and out of his cell surfaced on social media Thursday. Kinne was transferred from Panola County Jail to Union County Jail on Thursday. (Jareba Vassar Henderson/Facebook)

A former member of the Oxford Police Department was relocated from the Panola County Jail following a photo that surfaced on social media showing him potentially receiving preferential treatment.

Matthew Kinne was transferred to the Union County Jail on Thursday in the wake of a photo showing him eating outside his cell, unguarded, at what appears to be a desk. Kinne is facing a murder charge in the May 20 death of Dominique Clayton, who was found shot to death in her bedroom.

District Attorney Ben Creekmore told news outlets that officials did not want to release which jail Kinne was being transferred to, citing concern of the inmates learning of him being a former police officer. However, the MobilePatrol phone application shows Kinne was booked into the Union County Jail within the last 24 hours.

“The photo of Matthew Kinne getting preferential treatment while incarcerated in jail was a slap in the face of the family of Dominique Clayton,” Clayton family attorney Carlos Moore told the EAGLE. “However, it only made us more determined to get justice for Dominique and to continue to pray that Matt is indicted for capital murder and convicted of the same.”

Kinne’s case will go before a Grand Jury during Lafayette County’s final session of the year next week.