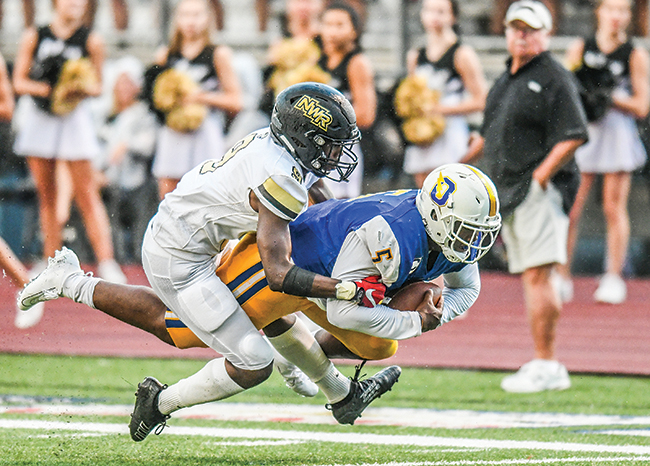 Last season, Mother Nature put a damper on Oxford’s season opener. This year, she tried again but Oxford, and their defense, had other ideas.

The Chargers entered 2019 with high expectations in the offseason and ranked inside several preseason top-10 lists. They proved those pundits correct, at least in Week 1, with a 43-7 win over Northwest Rankin at Bobby Holcomb Field on Friday.

After a brief weather delay, Oxford (1-0) dictated how the game would go in the second drive of the game. With Northwest Rankin (0-1) pinned deep in their own territory the Chargers’ defense earned a holding call on the Cougars in the end zone to gift them the first two points of the game. The Chargers defense was stout throughout the night, giving up only one touchdown off a 7-yard run by Jordan Cavitt in the second quarter.

The defense produced more points on the scoreboard when Northwest Rankin fumbled and Oxford’s AJ Toliver came up with the 1-yard scoop-and-score.

“I was really proud of the way we played,” Oxford head coach Chris Cutcliffe said. “We have a very experienced defense back and we have high expectations for them. They played really well tonight and we’ll continue to build on it.”

Oxford quarterback John Meagher and the offense put up points and numbers of their own. J.J. Pegues scored two touchdowns while running back K.J. Wadley scored on an 81-yard run in the second quarter.

Pegues’ two scores consisted of a 1-yard run and a 15-yard reception. The senior finished the night with 74 passing yards and 6 rushing yards. Wadley rushed for 104 yards on 8 carries. Meagher threw for two touchdowns and 143 yards. He also scored on a 23-yard run.

Sophomore running back Omar Howell scored the Chargers’ final touchdown of the night on a 6-yard run early in the fourth quarter.

“When we come out in games we just perform,” Meagher said. “When (Pegues and Wadley) can move the ball like we did tonight it opens up so many other things. There’s stuff that (Pegues) does that you see on Madden. It’s incredible the stuff he does. I don’t think he can do some of that stuff then the goes out and does it.

The only blemish on the evening was the amount of penalties the Chargers racked up. Oxford was called for 75 yards in penalties, with some of them resulting in drive killers or taking points off the scoreboard.

“That’s something that we take a lot of pride in and I don’t that’s typical of our football program,” Cutcliffe said of the penalties. “There was definitely some sloppy things in all three phases but I just told the team I was proud of how hard they played. Those other things are things we can correct.”

Oxford goes on the road for the first time in 2019 next week with a trip to Starkville to renew The Little Egg Bowl rivalry.

Football is Back! Week one High School football previews