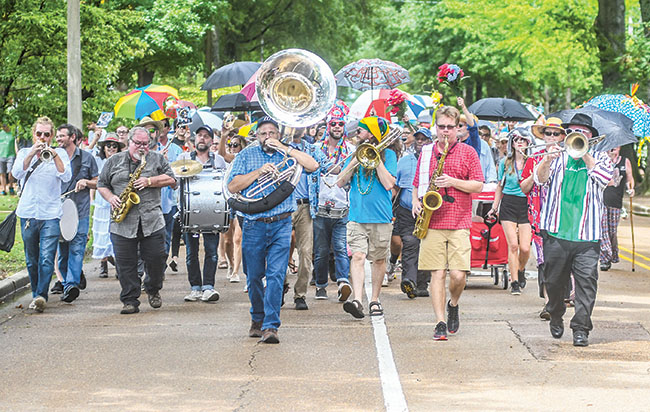 The passing of Ron Shapiro shook not only the arts community in Oxford, but nearly every crevice of the city was touched by the man who simply went by the name ‘Ronzo.’

After Shapiro passed away last Monday after a lengthy battle with cancer, an announcement was made that Oxford would celebrate Shapiro’s life on Nov. 1 with a time and location to be determined. That was too long of a wait for Nathan Robbins and others. Robbins, along with select people involved in Oxford’s music community, decided to celebrate Shapiro the only way they knew how.

Six days later, North Lamar Boulevard and the Downtown Square were filled with Oxonians chanting “Ronzo” and participating in Oxford’s first second line – a New Orleans-style parade common at celebrations such as funerals and weddings.

In something of a grassroots movement, word spread of their plan to do a second line and a Facebook page was made for the event. The party began in the parking lot of the Midtown Shopping Center, when hundreds of people filed in behind the band, which consisted of Oxford musicians who volunteered to be take part, and marched down North Lamar.

Prior to the second line starting, there were around 257 people listed as going to the event, but by the time 2 p.m. rolled around, it seemed closer to 500 or more in the parking lot. The second line served as a magnet, with people coming out of their homes on North Lamar to see what was taking place. Some even left their porches and joined in.

“It just kept growing,” Robbins said. “There’s a lot of good people in Oxford, and it’s a really good community, so it was really great to see that support for Ronzo. People just came out and really stepped up. I turned around and looked once, and it was amazing. I couldn’t see the end of the parade.”

By the time the parade reached the Square, the music had gotten everyone’s attention. When the second line reached its destination at Proud Larry’s, the entirety of South Lamar was filled from building to building of people with umbrellas, costumes, signs and even a replica ‘Ronzo’ singing and celebrating Shapiro’s life.

When ‘Ronzo’ arrived in Oxford in the late 1970s, he founded the Hoka Theatre, which became a cult favorite that provided an alternative option for films that were not being shown in commercial theaters. Throughout his 40 years in Oxford, with a short detour to Atlanta mixed in, Shapiro also opened other businesses after the Hoka closed its doors in 1997.

“That thing was amazing,” Robbins said. “That’s the first time I’ve been a part of anything that developed like that and just took off and immediately became what it was supposed to be.”