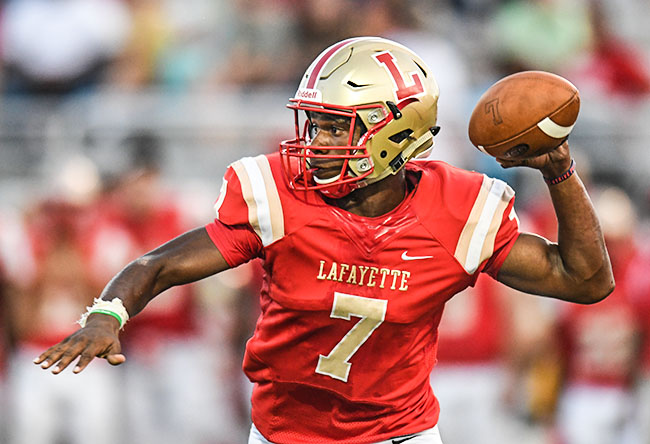 Lafayette had a new, full-time quarterback on Friday night.

In a roundabout way, that was sort of the plan all summer. But it also was sort of out of necessity.

Randy Anderson, the team’s starting quarterback in 2018 and three-star athlete recruit, hurt his hip and glute area in Lafayette’s jamboree game at South Panola. He missed some practice last week before returning later in the week after rehab. The team was confident he’d be able to play in the season opener on Friday, and he did for a bit, but he’s clearly not at 100 percent yet.

“We got him out there and ready for tonight. He was ready to go,” said head coach Michael Fair after Friday’s season opening win. “But it was just one of those things where we were getting first downs without him. We put him out there a little bit. He’s healing fine and he probably could’ve played tonight. But we’re going to get him ready for next week.”

Randy Anderson started the game at wide receiver, with sophomore Tyrus Williams at quarterback. That’s the plan – to use Anderson as a receiver, quarterback and defensive back. However, with the team leading, he didn’t see any second-half playing time. He carried the ball twice in the game while at quarterback, totaling six yards. He played, but clearly wasn’t himself.

The Commodores didn’t need Anderson to roll to a 34-14 win in week one. They might not need him again this week, playing a Southaven team that lost week one by 24 points to Houston, but at some point, Lafayette is going to need their best player. They’re confident that might be this week. But for now, they just need to rest him and get him back to 100 percent.

COLUMN – There’s a little Andrew Luck in all…