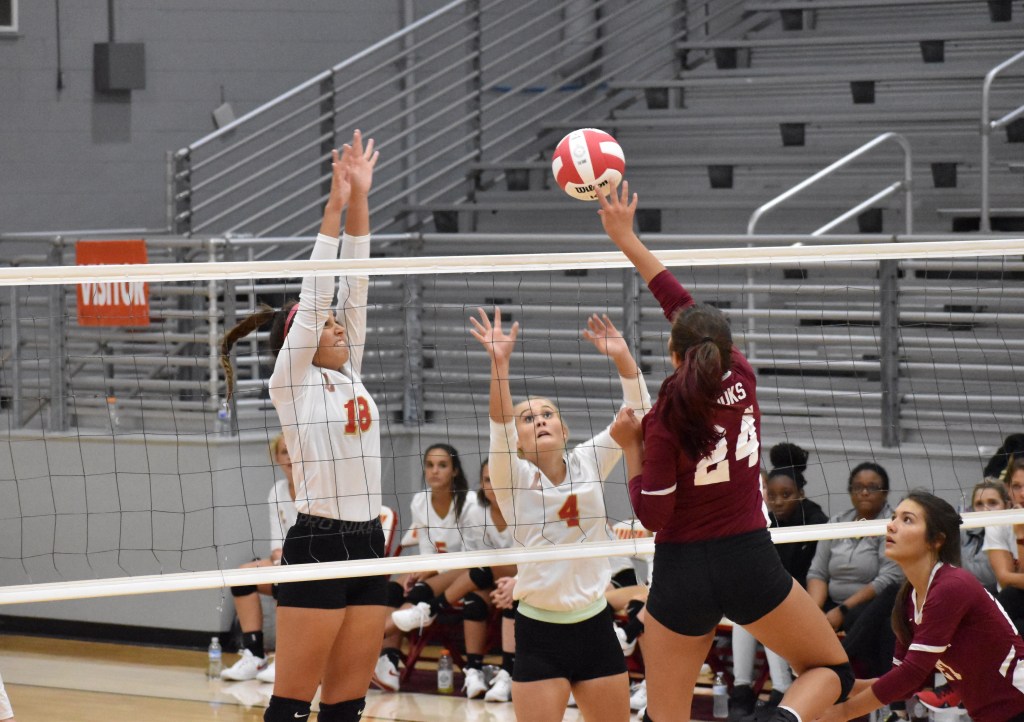 Lafayette's Hudson Lindsay and Gracie Dunn go up for a block in a match against Caledonia. Aug. 27, 2019. (Photo by Nathanael Gabler / Oxford Eagle)

It was always going to be a young team, and Lafayette volleyball is just learning how to battle through the rebuilding process.

The team that brought back just two starters and two more role players from a year ago is experiencing some growing pains. However, it often seems the results on the scoreboard don’t exactly mirror the product and improvements they’ve made on the court.

“We play good volleyball. It took them an hour and 15 minutes to win three sets. It should take 35 to 40 minutes,” head coach Clint Jordan said. “Every point is long. Everything we’re doing is right. But we’re just young. We need some time.”

Lafayette came into the season knowing it could start rough. They play an incredibly difficult schedule to open the year, including a handful of 6A teams in addition to their normal 5A schedule. Caledonia, while a 4A school, is one of the best two or three in their classification in the entire state.

The team is becoming more consistent point-to-point, in spite of the results on the scoreboard. And one critically important thing coach Jordan pointed out – these girls aren’t going to give up.

“They’re going to compete and they love each other. So I don’t think they’ll ever quit on each other,” Jordan said. “It’s 23-12 and they’re diving on the floor and trying to win every point. That’s the kind of kids we get to coach here at Lafayette. But yes I have to make sure their heads are up and make sure we’re focused on that goal.”

Despite the improved consistency in broad strokes, on Tuesday it was the inconsistencies in serving that haunted the team. In one set, they had back-to-back serving errors, allowing Caledonia’s best server to step up and put together a really good run on the other side, icing the set.

Right now, the only thought on a day-to-day basis is for the Lady Commodores to just continue steadily improving. At some point – and the team has yet to play a game within their division – they may put the pieces together.

FILM STUDY: How the Oxford offense beat up on…