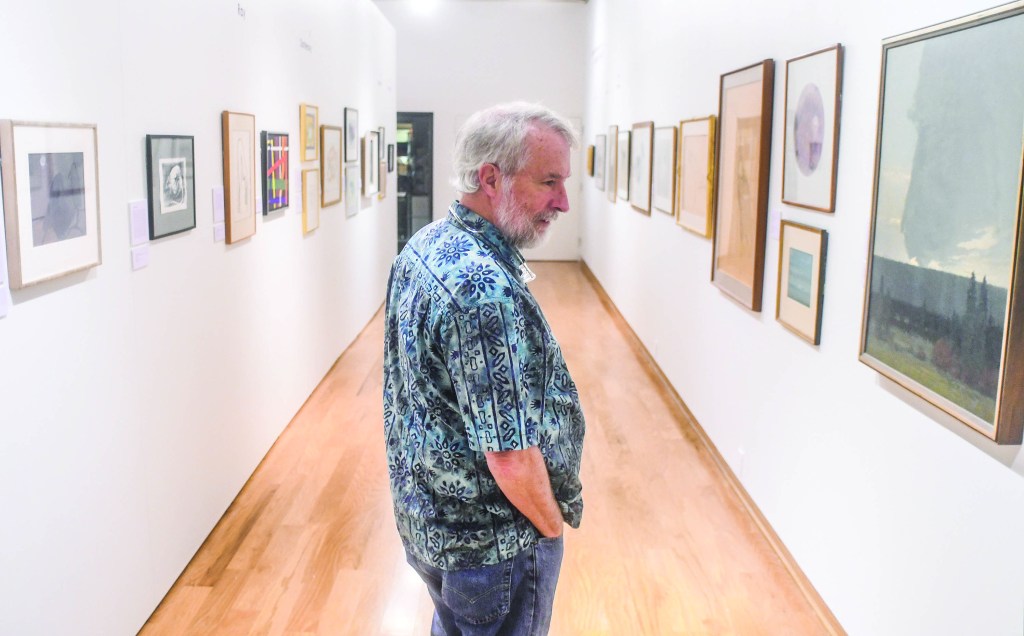 Stephen Threlkeld looks over art on display at University Museum during the monthly art crawl, in Oxford, Miss. on Tuesday, August 27, 2019. The museum celebrated its 80th anniversary during the event. (Bruce Newman, Oxford Eagle via AP)

The University of Mississippi Museum commemorated 80 years in the LOU Community on Tuesday with a reception and open house.

First known as the City of Oxford-operated Mary Buie Museum, the space first opened in 1939. Confined to a small brick original structure, it housed the collections of Mary Skipwith Buie of Oxford, an avid collector and an academically trained artist. She left her personal art collection to the City of Oxford in her will, and these items are in the Museum’s permanent collections. Funding for the Museum came from the generosity of her family, the Adair Skipwiths, and government programs such as the Works Progress Administration. Oxford operated the original museum from 1939 through 1974 before deeding it to the University of Mississippi.

“I remember it was very, very small when it was known as the Mary Buie museum, when I was at Ole Miss,” Oxonian Barbara Liddon said. “They do a fantastic job. We’re proud to have it (in Oxford).”

Today, the UM Museum consists of the main museum building, including the original brick structure and several additions. The complex also includes Rowan Oak and the Walton-Young Historic House.

As the UM Museum marks its 80th year, it’s stronger than ever, director Robert Saarnio said.

“We have proudly raised our ambitions in the quality of exhibitions and programming, such as children’s programs, for which we are widely renowned,” Saarnio said. “With every passing decade, service of the museum has grown.”

Saarnio also credited much of the museum’s success to its staff members, saying they’ve never had a better team than they do now.

The University of Mississippi Museum is open Tuesday through Saturday, from 10 a.m. to 6 p.m. To learn more about its exhibits and programming, visit http://museum.olemiss.edu.