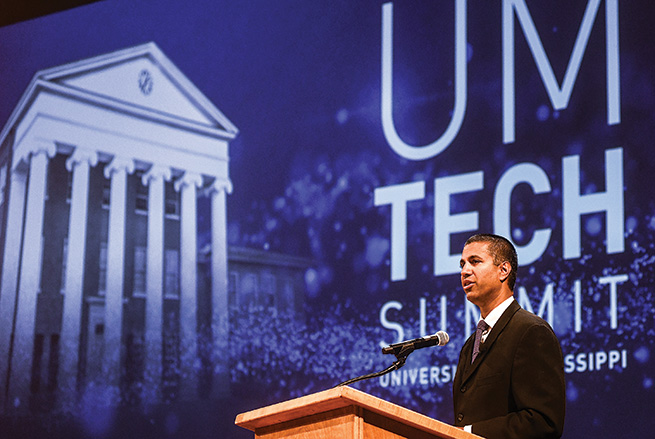 Ajit Pai, chairman of the Federal Communications Commission, speaks at the University of Mississippi's Tech Summit at the Ford Center in Oxford, Miss. on Wednesday, August 28, 2019. (Bruce Newman, Oxford Eagle via AP)

Some of the biggest names in technology and communication came to the University of Mississippi on Wednesday to discuss hot topics in the industry and its future.

“This year is a quantum leap in terms of the subject matter and the lineup,” Wicker said following his speech to begin the summit.

Wicker was the guest of honor, while Pai was the guest government speaker. David Cohen, senior executive vice president and chief diversity officer of Comcast Corporation, was the keynote speaker.

In January, Governor Phil Bryant signed the rural internet bill into law, allowing rural electric cooperatives to provide high-speed internet to their customers. The topic of broadband was heavily discussed, and was the subject of the first panel during Wednesday’s summit.

The Mobility Fund Phase II eligibility maps will determine how up to $4.3 billion in support for rural wireless broadband expansion will be allocated over the next 10 years.

“Before we start distributing (the money) we need to make sure we know where connectivity already is and where it is not,” Wicker said. “We feel we’ve had an inaccurate map and so we’ve had to take a step back and insist that we get good data.”

During his speech, Pai mentioned that his mission from his first day as chairman was to close the digital divide. In 2018, more fiber optic cable was installed in more homes than in any previous year since the FCC has kept such records. The average fixed broadband speed increased by 4 percent year over year from December 2017 to December 2018.

“We’ve taken a number of steps over the last two-and-a-half years to make it cheaper and easier for broadband providers to construct these next generation networks,” Pai said. “We also realize there are some places, largely rural areas, where no providers can build a business plan to do this alone.”