Defense, special teams come up big in the second half as Lafayette rallies past Southaven 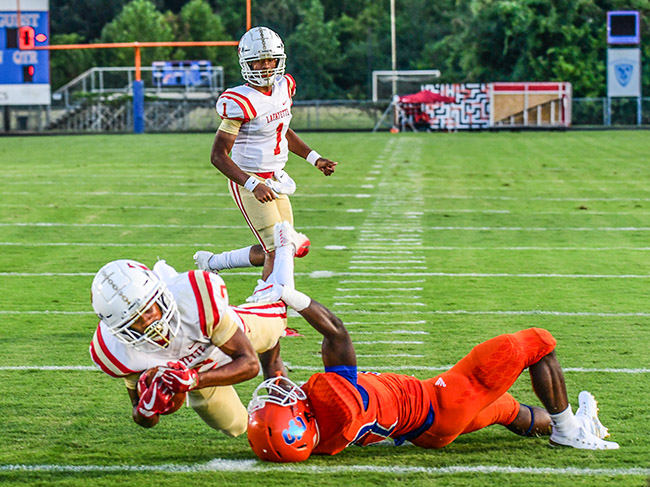 SOUTHAVEN – Lafayette knew coming into this year that it would be tough to fill the void in the backfield left behind by Lance Stewart and Jamie Shaw, but it might not be as tough a task as they originally thought.

The Southaven defense got a heavy dose of Xzavious Stokes all night in the No. 7 Commodores’ 20-16 victory over the Chargers at Southaven High School on Friday. The senior finished with 120 yards and a touchdown on 22 carries.

“(Stokes) has been right there waiting on his turn,” LHS head coach Michael Fair said. “I said earlier in the game, we’ve got a couple backs that nobody knows about because we’ve had (Jamarcus) Quarles and Stewart and Shaw and all those guys who are really good. This cat’s pretty good, and when he gets in open field he’s electric. A senior who’s waited his turn.”

Defense was optional on both sides of the field in the first four drives of the game, as each team scored touchdowns in each of their first two possessions and chew up the clock with lengthy drives.

Southaven started the game with a 70-yard opening drive that used up more than seven minutes of the first quarter and was capped by a touchdown catch by junior Isaiah Brevard. Brevard also converted the 2-point conversion to give the Chargers (0-2) the early 8-0 lead. Brevard hooked up with Hibbler once again on Southaven’s second drive with a 21-yard touchdown grab to make it 16-6 Chargers at the time.

Lafayette (2-0) had a swift response on each drive. It was all Stokes on the Commodores’ opening drive, rushing for 77 yards on six carries and capping the drive with a 6-yard touchdown run. The Commodores’ second drive resulted in a 54-yard, 10-play scoring drive, capped by a four-yard touchdown run by quarterback Tyrus Carmichael-Williams to make it 16-13 heading into halftime.

The defenses began to clamp down in the second half, forcing both teams to use their punter for the first time all night midway through the third quarter. The play of the game came in the fourth quarter, when the Commodore defense blocked a Charger punt. The deflected ball landed in the hands of a waiting Keaton Hunter-McIntosh, who took it to inside the Southaven five yard-line.

“Last year, we felt like our special teams was something that needed a lot of work,” Fair said. “We spent a lot of time in this offseason shoring that up, and through two games it’s been huge for us. That special teams play was huge for us.”

Senior Randy Anderson converted the blocked punt into points three plays later, with a one-yard run to give the Commodores their first, and only, lead of the game with just under nine minutes remaining. The defense kept Southaven scoreless in the second half.

Lafayette will get off the road and head back to William L. Buford Stadium next week for their home opener against defending Class 6A state champion Horn Lake.

“What an opportunity we’ve got,” Fair said. “I’m really fired up about that and they’re going to get our best.”