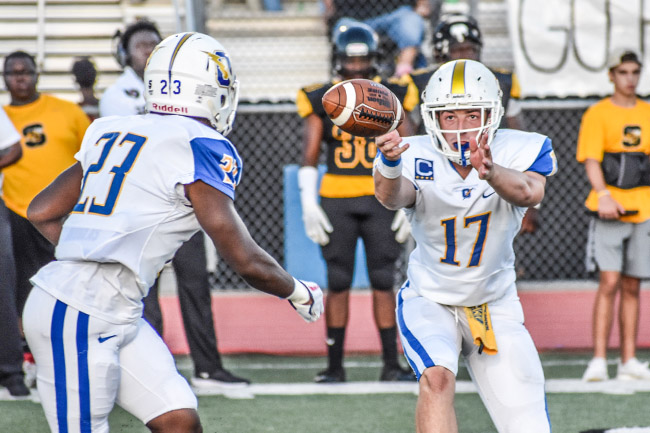 STARKVILLE –  The Yellowjackets’ first drive was smooth, simple and just too easy.

Starkville needed just 2:51 and nine plays to move the ball 85-yards for a game-opening drive. It just about set the course for the entire Little Egg Bowl.

Starkville got out to a 24-0 lead, but Oxford wasn’t done. The Chargers scored 17 points unanswered, before a fourth-quarter interception sealed the deal for the Yellowjackets. Starkville won the game 45-17, their sixth straight Little Egg Bowl.

Oxford had a great chance down 17-0 in the second quarter. With 6:33 remaining until halftime, Byron Pearson intercepted Yellowjacket quarterback Luke Altmyer, setting up Oxford near mid-field. John Meagher threw his own interception just one play later. They wouldn’t get on the board until the closing drive of the first half. The Chargers move the ball 80-yards on five plays to close the half, capped by a J.J. Pegues two-yard plunge for a touchdown. Strangely, it was Pegues’ first touch of the half.

Getting the ball to start the second half, Oxford followed up their drive to end the half with another long drive to open the half. After Meagher’s throw on 3rd and 5 went incomplete, the Chargers decided to go for it from the Starkville 20. Meagher’s pass on fourth down went to Dekyren Johnson, complete, but for just four yards. Yellowjacket ball.

“They had a really strong defensive line and they were just bringing blitzes,” Meagher said. “We got better as the game went along, but that front is good. But if we get a little momentum, everybody builds off each other. That’s one thing this team does well. If we get a spark, we keep on going with it. And that happened really, right up until the last few minutes of the fourth quarter.”

The Chargers would cut the score to 10 late in the third quarter with a John Meagher keeper, and after a forced three-and-out on the subsequent Starkville possession, Oxford was back in it. Oxford held Starkville scoreless through the third, repacking havoc in the backfield to the tune of negative 33 rushing yards in the quarter.

Meagher keeps it for the score. Oxford cuts it to 25-14 with 3:06 left in the 3rd quarter pic.twitter.com/0MOwEvLi4D

All of a sudden, Oxford had all the momentum. A Jack Tannehill field goal cut the lead to seven, before Oxford’s defense forced a fumble just 30 seconds later.  In just another momentum swing in the half, three plays following the fumble recovery, Oxford had a turnover of their own. John Meagher threw his second interception.

A late Meagher interception essentially iced the game. Starkville scored three more times over the final five minutes of the game, making the seven-point game a whopping 28 on the final scoreboard.

As easily as Starkville moved the ball early, the Oxford defense was exceptional early in the second half. The Yellowjackets accumulated 212 total yards in the first half, including 204 through the air from Luke Altmyer. The full second half numbers don’t do justice to how good the defense was in the third quarter due to time yards, but Oxford held Starkville to just 23 total yards during their third quarter comeback.

“We fit better in the run game in the second half, and we did a few different things in coverage to try and prevent those bigger plays in the passing game,” Oxford head coach Chris Cutcliffe said. “For a while, we were able to do that.”

Meagher completed just 39 percent of his passes on the night, while his Starkville counterpart, Altmyer, set the Starkville school record for completions while throwing for 331-yards.

With the loss, the Chargers have lost the Little Egg Bowl game for the sixth consecutive year. Chris Cutcliffe has yet to beat the Yellowjackets as the Oxford head coach. The Chargers return home next Friday for a meeting with Grenada.