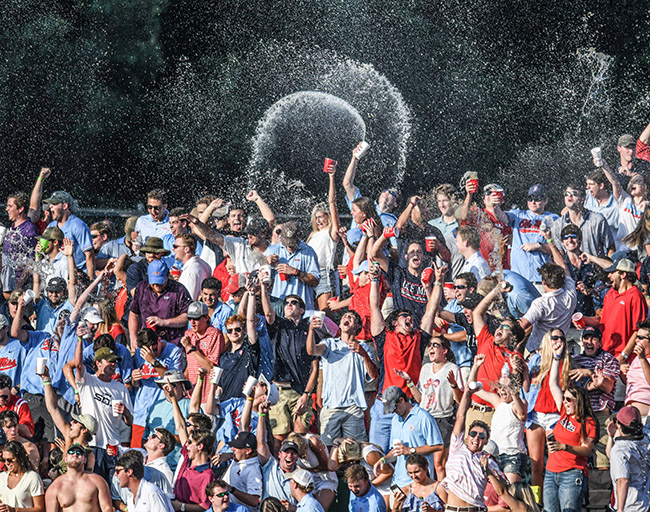 With the announcement, Ole Miss becomes the seventh school in the SEC to announce they will sell alcohol, following an amendment to prior SEC alcohol bans earlier this summer. Ole Miss joins Arkansas, LSU, Missouri, Tennessee, Texas A&M and Vanderbilt as schools to sell alcohol this coming year. Mississippi State has not decided.

“This is another opportunity to enhance what is already one of the premier game days in college football,” interim athletics director Keith Carter said. “I want to thank Chancellor Sparks and the rest of our university administration for their leadership and support during this process. We expect this decision to help reduce incidents associated with overconsumption on game days. The athletics department will work hand-in-hand with other campus officials and within the guidelines of the SEC to ensure a safe and responsible environment for all fans.”

Ole Miss will need a little time to figure out the regulatory side of selling alcohol, hence why they won’t be starting selling right away for the first home game against Arkansas a week from Saturday. Instead, the first game in Vaught-Hemingway Stadium that will have alcohol sales is the Texas A&M game on Oct. 19. Alcohol will also be sold in The Pavilion during basketball season and will continue into baseball season.

Technically, Mississippi law prohibits alcohol sale on college campuses. That being said, Ole Miss will be circumventing that law, because Vaught-Hemingway Stadium has “resort status,” an exemption allowing a way around the alcohol sale law. Southern Miss announced last week they would be doing the same for their football games.

“The university has been deliberate in our approach to making this change,” said Ole Miss Interim Chancellor Larry Sparks. “We have assessed the relevant issues and focused on an implementation timetable that works best for our university. Maintaining the safety of our patrons and participants and maintaining an atmosphere suitable for families is of utmost importance. We appreciate the support and patience of our fans as we implement this change.”

Ole Miss listed several considerations for their decision to wait until October 19 to sell alcohol, including the need to promote responsible behavior and consumption inside athletics venues and the need to assess staffing needs.

In addition to sales inside the stadium, they will offer “limited beer sales” before each football game inside the Coca-Cola Rebel Fan Fest on the plaza between Vaught-Hemingway Stadium and The Pavilion.

From a monetary standpoint, the decision could be highly beneficial. In 2017, the last time numbers were reported, Texas made over $3 million in revenue from sale of alcohol in football season alone.

More details from this story are still coming in, and we will update with details as they become available.

But all this presents one final question: Will there be beer showers in Vaught-Hemingway Stadium?