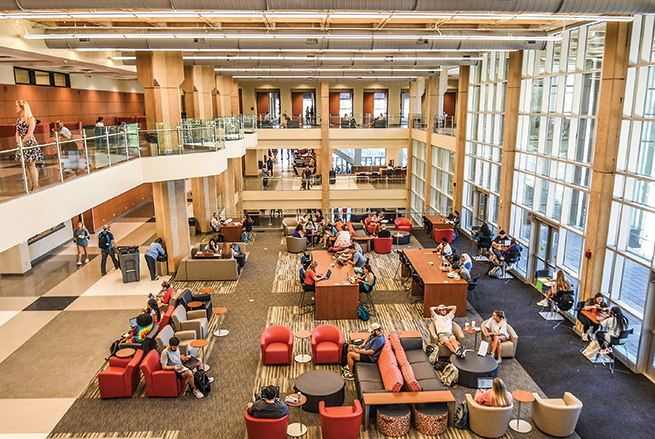 Another one of the University of Mississippi’s capital projects was officially unveiled on Thursday.

A day after the new South Campus Recreation Center officially opened its doors, the school celebrated the completion of a lengthy renovation project: the Student Union.

The new and improved Ole Miss Student Union held its official dedication ceremony and re-opening to commemorate the completion of the $60 million renovation.

Students got a first look at the new Student Union when it opened at the end of the 2019 spring semester, but Thursday’s ceremony officially marked the beginning of a new era.

“This fantastic renovation and expansion has been a number of years in the making, but the results show it was clearly worth the wait,” said Ole Miss interim chancellor Larry Sparks during the ceremony.

The project provided an enhanced dining space, with five food vendors, including Chick-Fil-A and Panda Express. The former was already in the food court prior to the renovation. Other additions included a new auditorium with theater-style seating that will be used for events.

The Barnes & Noble bookstore and café received major overhauls, expanding their footprint on the second floor. The bookstore remains to the left of the main entrance to the Student Union.

“For just over four years, the Student Union has had some sort of construction taking place,” said Bradley Baker, director of the Student Union. “Our campus community has been extremely patient during this project and for that I am grateful. We’ve seen fences installed and moved, walls constructed and re-moved, this plaza demolished and completely refurbished, trees and shrubs planted and now doors are open.”

The new Student Union is home to several student organizations, including the Student Activities Association, Associated Student Body and the Black Student Union. The Center for Inclusion and Cross Cultural Engagement and Fraternal Leadership and Learning also have offices in the new Student Union.

“Some of us have waited quite awhile for this,” ASB president Barron Mayfield said. “The Union is stacked from top to bottom with spaces and services to enhance the student experience. It has centralized many of the departments that are tasked with developing our students as leaders, community and individuals. Because of this, we will see more collaboration from our student organizations and University departments.”

Following the ribbon-cutting ceremony, a time capsule was filled with items and placed into a wall of the Student Union. Items included Thursday’s edition of The Daily Mississippian, the student-run newspaper, a copy of the 2019 Ole Miss yearbook, change from 2019 as well as a copy of a program from the original grand opening ceremony for the Student Union in 1978.