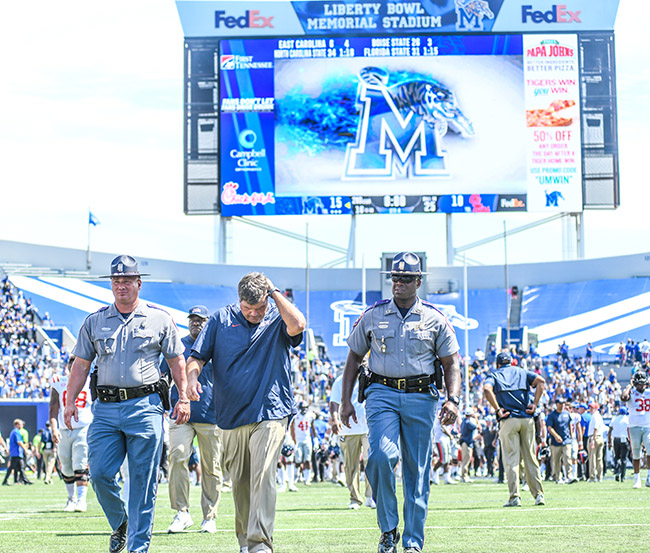 MEMPHIS — Coming into Saturday’s season-opening game against Memphis, there were questions that needed answering on both sides of the football. Primarily, how would a much-maligned defense and an offense searching to fill holes look under new coordinators?

After the final horn sounded, half of those questions were answered while more questions arose out of Ole Miss’ 15-10 loss to the Tigers at the Liberty Bowl Memorial Stadium.

The Rebels’ offense was held to 173 total yards and one touchdown and struggled to find any rhythm until late in the third quarter. For the first time since Nov. 22, 2014  – a 30-0 loss to Arkansas – Ole Miss (0-1) was shutout in the first half.

In his first career start Matt Corral never found his footing, completing 9-of-19 passes for 93 yards and an interception. Corral’s offensive line dealt with a never-ending barrage from the Memphis defensive front, causing the redshirt freshman quarterback to stay out of sync.

The biggest moment of the game came when Corral was sacked in the end zone with six minutes remaining for a Memphis safety.  The Rebels were only down by three points and looking to tie or take their first lead of the game when the safety occurred.

“We struggled to block them up front. We struggled for some movement,” Ole Miss head coach Matt Luke said. “At times early on, a couple bad decisions. We stayed behind the chains, couldn’t get anything going. In the second half we limited negative plays a little but obviously, giving up a safety,  (when) you’ve got a chance to go down and win the football game.”

A 35-yard field goal by Luke Logan late in the third quarter and a one-yard touchdown run by Scottie Phillips in the fourth quarter was the only offense the Rebels produced on Saturday.

Memphis (1-0) jumped out to a 7-0 lead off a one-yard run by quarterback Brady White late in the first quarter. A one-yard run by running back Preston Taylor with 40 seconds remaining in the first half were the only other points the Tiger offense would muster against the Rebel defense.

Under new defensive coordinator Mike McIntyre, the Rebels did not give up any points in the second half. Memphis’ five second-half possessions resulted in an interception, two punts and a turnover on downs. The fifth possession ended the game.

The 15 points were the fewest points allowed by an Ole Miss defense since giving up 14 to Georgia in 2016.

“Our defense kept us in the whole game and looked like a much-improved defense,” Luke said. “We got to go back, watch some film and we’ve got to grow up in a hurry. We’ve got SEC play starting next week and going to move forward and get that bad taste out of our mouth.”

Ole Miss returns home to host Arkansas next Saturday at 6:30 p.m. on the SEC Network in both teams’ conference opener.

Starkville pulls away from Oxford late to win sixth…