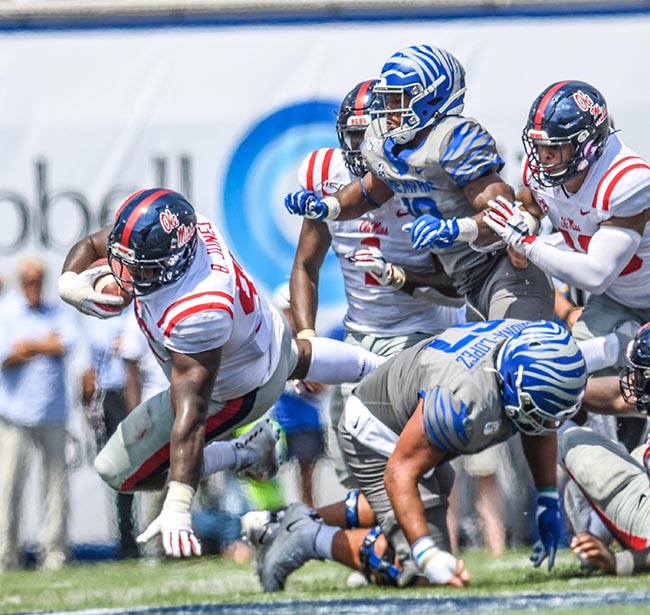 MEMPHIS – The Ole Miss defense was simply the worst unit in the Southeastern Conference last season.

However, despite a season opening loss at Memphis on Saturday afternoon, the Rebel defense looked… surprisingly competent.

Coming into the season, the Rebel defense presented an interesting conundrum. They returned a ton of players from last year, but last year’s defense was simply atrocious. Is it better to have have experience, even without results, or is it better to simply start new? Ole Miss sort of did both. They brought in Mike MacIntyre to implement a new system, all while bringing back a lot of experience and injecting it with some new, talented faces.

In Saturday’s season opener, the experiment worked. Ole Miss’s defense, which ranked among the worst in all of college football a year ago, held Memphis to 13 points offensively. The other two came from a safety. Ole Miss lost the game 15-10, but that defense showed flashes of impressive play.

“The team I watched on film last year, I don’t think would have kept battling,” MacIntyre said. “After what the program’s been through, I thought the kids played extremely hard… especially the defensive front played stout and tough. They really got after it.”

The Ole Miss defense ranked No. 90 in the country a year ago by S&P+. Against the rush, that number jumped even further to No. 110. They were allowing 5.63 yards per carry last season. Saturday was just different – better. Memphis ran for 192 yards, but needed 52 carries to do so – a clip of 3.8 yards per carry. That’s a 33-percent improvement for Ole Miss compared to a year ago.

A problem area from last year that Ole Miss was unable to sure up, at least against Memphis, was the pass rush. Ole Miss totaled just 23 sacks a year ago (1.91 per game). Against Memphis, they had just two sacks – essentially last year’s average. One of these was hardly even a sack, more of catching up to Memphis quarterback Brady White on a scramble, right before he was about to cross the line of scrimmage.

Ole Miss brought in Sam Williams, the top-rated junior college pass rusher, in an attempt to aid that pass rush. The switch to MacIntyre’s 3-4 was also supposed to help, primarily based on the unpredictability of where that fourth rusher was coming from. At least against Memphis, nothing was able to help that.

“They’re big and powerful. For what (Memphis) was trying to do to us defensively, a couple times we went nickel early and they ran the ball,” MacIntyre said. “I said we’re just going to stay in base and see if we can slow them down. And we did. That helped us win a couple of third downs and fourth downs.”

The ability to stay in that base package was aided tremendously by Ole Miss corners and their ability to tackle. In particular, Jaylon Jones made a huge fourth down stop, busting up a wide receiver screen play for a loss. Keidron Smith did the same thing at least twice in the first half.

With all the positives, there was still a bit of the same late in the game. When Memphis was simply lining up late in the fourth, powering ahead to burn clock and end the game, Ole Miss couldn’t stop them. Memphis ran the ball for nine, seven and five yards on the three final plays on the game prior to the kneel down.

“We still have a lot of room to improve,” Coatney said. “We got 11 more games guaranteed. Every day and each week, that’s our goal – just to get better.”

For all the numbers about yards per carry and sacks, there’s really only one number that truly matters. The Ole Miss defense allowed just 13 points. The loss isn’t the outcome Ole Miss wanted and the offense had a lot to be desired, particularly early. But the defense showed flashes. Truly, they’re the only reason the Rebels had a shot late.