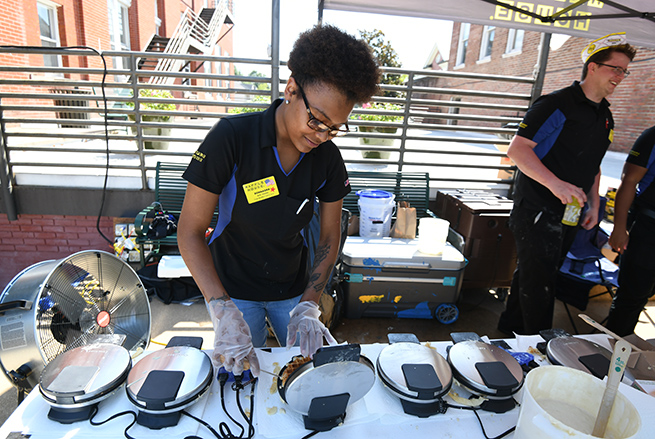 Donnasha Hubbard cooks waffles as Waffle House gives them away on the Square, in Oxford, Miss. on Wednesday, September 4, 2019. (Bruce Newman, Oxford Eagle via AP)

Those smothered and covered dreams of Oxford residents could soon become reality.

Waffle history was made on Wednesday, when Waffle House was served in Lafayette County for the first time.

The visit was part of a week-long tour by Waffle House through towns who currently do not have one of their establishments. This stop also coincided with National Waffle Week.

Oxford has long pined for a Waffle House to be built within its city limits. Thanks to Mayor Robyn Tannehill, Ole Miss law professor David Case and the power of social media, momentum toward making that dream a reality picked up steam in the past six months.

“I think that Waffle Houses have been talked about in Oxford, Mississippi for many, many years,” Tannehill said.  “My understanding from Waffle House is they’ve considered putting a Waffle House in Oxford numerous times over the past 10 years. I think that the attraction is simply proof that people are looking for something fun to talk about.”

From 10 a.m. to 1 p.m. on Wednesday, Waffle House set up at the RSVP Plaza next to City Hall and handed out free waffles and merchandise to commemorate the historic occasion.

On Aug. 23, Waffle House posted a poll on their social media accounts asking people to vote on which city they should visit this week. Oxford was among the cities to be voted on but College Station, Texas ended up winning the vote.

The following day, Waffle House announced they would be coming to all three cities listed in their poll (San Antonio, College Station and Oxford) as well as Avondale Estates, Ga. and Atlanta.

Bobby Garner, former Ole Miss quarterback and current senior vice president of Waffle House, was one of several staffers on hand, passing out free waffles on the Square. Garner played for the Rebels from 1976-78.

“It’s been a long time coming,” Garner said. “This here is just kind of solidifies our decision to go ahead and move into this market here. The mayor’s commitment is just wonderful.”

Nothing has been made official and talks are still ongoing, but Garner said they are “aggressively looking” at a potential site and potentially could have one built in Oxford by 2020.