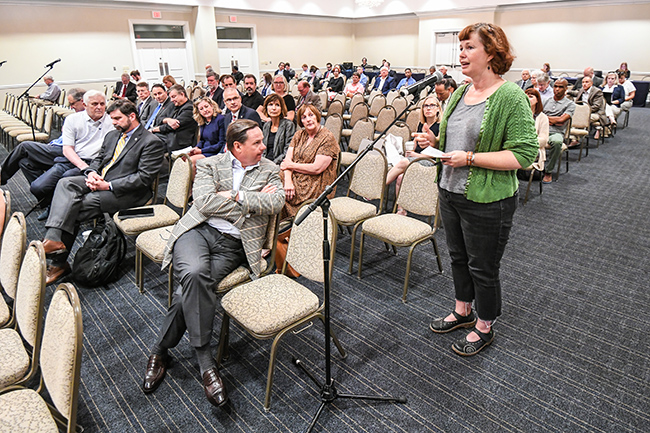 Molly Pasco-Pranger, chair and associate professor of Classics at the University of Mississippi, speaks as the Board of Trustees of State Institutions of Higher Learning holds a listening session to gain input from University of Mississippi stakeholders on the qualities and qualifications they believe the next Chancellor should possess, at the Inn at Ole Miss, in Oxford, Miss. on Thursday, September 5, 2019. (Bruce Newman, Oxford Eagle via AP)

The search for the University of Mississippi’s next chancellor is entering its final stages, beginning with Thursday’s six listening sessions.

For blocks of 45 minutes, members of the community were able to present comments and recommendations of what they would like to see in the University’s next leader. Representatives from the Institutions of Higher Learning, Board search committee and the Campus Search Advisory Committee were all in attendance inside the Gertrude C. Ford Ballroom at the Inn at Ole Miss.

The sessions began at 9 a.m. and ran until 4 p.m., with academic leaders, faculty, staff, students, alumni and community members of Oxford all able to have a chance to speak to the search committees.

Each group had their own session with students, faculty and staff having a joint session at 1 p.m. Approximately 15 people spoke during the joint session, echoing sentiments from earlier in the day as well as speaking up for the groups represented.

The sessions were not question-and-answer in format; only comments were allowed to be given to the panel. Several of those who spoke began their comments by stating their displeasure with the format that was chosen for Thursday’s session and the similar session at the University Medical Center in Jackson on June 14.

“Having been to several sessions now, I’m not convinced that this is necessarily the best way to engage and get the kind of information that would be helpful in the search,” said James Thomas, an associate professor of sociology at Ole Miss. “It feels very much when you come up to the microphone that you’re coming before the court and its not clear to me quite yet how comments made here are going to be considered.”

One concern by several who spoke was to have a chancellor that puts student needs first, addressing a stigma the University has garnered throughout its history. The protests by pro-Confederate groups that took place on campus in February were used as an example.

The Confederate statue on the Lyceum Circle and its removal from its current location was also a topic during the session and throughout the student-only session that followed. In August, the University announced its relocation plan to move the statue from the Circle to the Confederate cemetery behind the C.M. “Tad” Smith Coliseum.

Others who spoke asked for a chancellor who could unite the University community.

“Something that I firmly believe and something that needs to be paramount for the next chancellor is someone who is a congruent leader,” said Gray Flora, who works in the Liberal Arts department. “I believe congruent leadership travels. I know this is a very unique place, but I worry in a selection process such as this, that it can be easy to over-emphasize how important it is that we have someone who understands our current culture and understands the ‘Ole Miss way.’ I love this University and I want to see us be excellent. So, lets find us the most excellent, congruent leader.”

IHL Trustee Ford Dye, who serves as the Chair of the Board Search Committee, provided an update on the timeline on the search process following Thursday’s sessions.