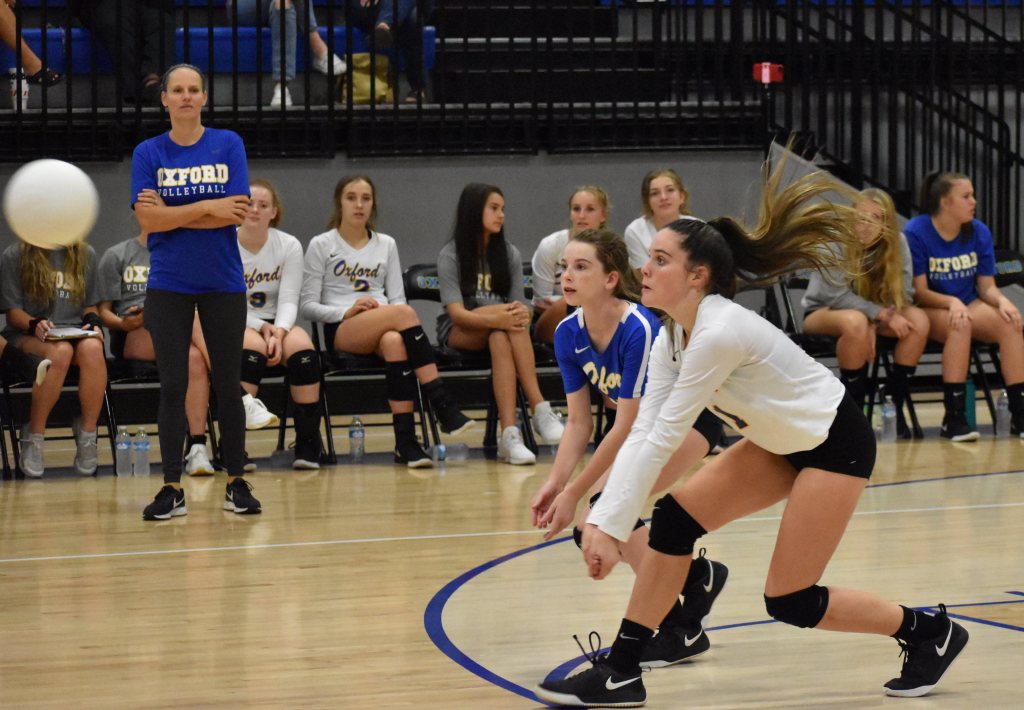 Coming off a nine-day stretch in which the Lady Chargers hadn’t won a single set, seeing a comeback fall into place in the opening set Thursday night against Water Valley was critical.

Oxford rallied down from seven points back, eventually beating the Blue Devils 25-23 in the opening set. They would carry that momentum through the next two sets, beating Water Valley in three very competitive sets to get back in the win column.

The first set was contentious, one of the most competitive Oxford has played in a few weeks. Falling down 7-14 early, Oxford scored five straight points, many of those behind 8th grader Madi Jones serving. The Chargers would fight back to tie the set for the first time at 19, not pulling ahead until the very end. They took their first lead at 24-23, winning that opening set on the next point.

After a few weeks of instability and struggles, just seeing them fight back was a critical sign.

“I knew that we were capable but that was more of an adjustment,” head coach Kacie Hengler said. “We had to learn that rotation. Our defense has been the issue. But this is a different team, they play different than the teams we’ve been playing.”

That adjustment had to do with the Oxford libero. Maggie Sudduth sprained her wrist in practice on Wednesday, and is out for a little while. A lot of that opening set was figuring out what to do without her.

The rest of the sets were competitive at times, but not nearly as eventful as the first. Oxford pulled away in the second set, winning 25-15. The third set was closer than the second. Water Valley came back from an early deficit to tie the game at 17, before Oxford came together to put it away. Final score: 25-19.

For Water Valley, the loss knocks them to 4-3 on the season. Yet, head coach Allison McCain was more than pleased with how his ladies battled on the night.

“They competed really well. They came out with a lot more confidence than they did last year when we played Oxford,” McCain said. “We played as a team and communicated. But we’re a young team so I was proud to see what they brought tonight.”

One of the not-so-young members of that Water Valley team is senior Lillian Lindsay. As good as Oxford was on the night, Lindsay was the best player on the floor. She totaled eight kills and 16 digs in the losing effort. Catherine Bianco lead Oxford with 12 digs and Ainsley Tacke lead with 11 kills.

Oxford now goes on the road for some of the toughest volleyball of their short season so far. They’ll travel to Hartfield Academy for a small, eight-team tournament with a field of some of the best teams in the state.

“This weekend can really show if we’ve improved defensively or not,” Hengler said. “That’s what I’m looking for this weekend. I know we can hang with our attacking and our blocking, but if our defense doesn’t pick up, we’ll struggle.”

The three-set victory for Oxford over Water Valley pushes them to 9-5 on the season. Despite the losses to Tupelo and DeSoto Central a week ago, they’re still undefeated in division play. Oxford plays their tournament this weekend, then goes on the road for their next four matches before returning home in two weeks. Water Valley also doesn’t play another home game until the 23rd.