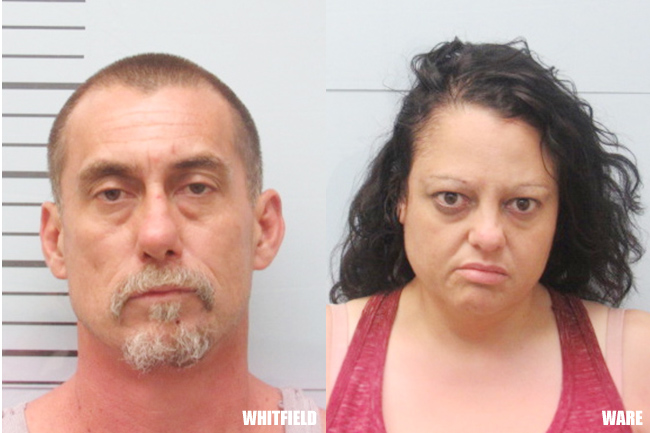 An alert citizen in the Woodlawn neighborhood noticed a suspicious vehicle around 8 p.m. on Friday, Aug. 30, which led to the arrest of a man and woman and the recovery of stolen items.

The vehicle was driving very slowly, so they called the Oxford Police Department. Officers arrived on scene and conducted a traffic stop on the truck. Inside the vehicle they found Shaun Whitfield, 45 of Senatobia, and Sheila Ware, 39 of Sardis.

While officers were out with the truck, a resident in the neighborhood called 911 to report that his house had been burglarized. The victim relayed through dispatch the items he was missing, all of which were visible in plain sight in the truck. Both Whitfield and Ware were arrested and transported to the Lafayette County Detention Center for residential burglary and possession of burglary tools. All stolen items were returned to the owner.

Upon further investigation, officers were able to identify a camping site at Wall Doxey State Park, where Whitfield and Ware were staying. Law enforcement officers with the Oxford Police Department, the Mississippi Department of Wildlife, Fisheries, and Parks, the Marshall County Sheriff’s Office, and the Panola County Sheriff’s Office eventually got involved after stolen items from multiple jurisdictions were discovered at this camp site.

Whitfield and Ware were both given a bond of $50,000 by a Justice Court Judge. Both individuals have holds for the Panola County Sheriff’s Department, and Whitfield has a hold for multiple felony warrants in other jurisdictions.

“This is why we preach, if you see something, say something,” Interim Chief Jeff McCutchen said. “You never know what it may lead to.”