Chargers run through Grenada behind balanced play from all-three phases 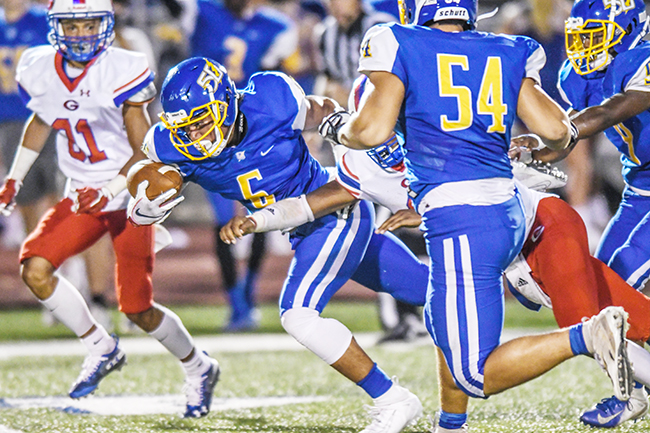 The Oxford Chargers stepped up on Friday night by powering through Grenada.

“We played well and we played hard,” head coach Chris Cutcliffe said. “All three phases did really good things throughout the course of the game so that was really nice to see.”

Facing a third and short in Grenada territory early in the game, Oxford turned to their best short-yardage set – JJ Pegues lined up in the wildcat. With Grenada stuffing the tackle box, Pegues bounced left off-tackle, running through a Grenada defender in route to a 34-yard touchdown to open the game.

Not to be outdone by the ground game, Oxford quarterback John Meagher was impressive in his own right on Friday night. Following the JJ Pegues touchdown scamper, Meagher connected with Derrius Pegues on the second drive. Derrius Pegues split the middle of the Grenada defense, taking it 54 yards for the touchdown. It was just one of many connections between the two on the night.

After surrendering two easy first-quarter field goals, the Grenada defense stepped up a little bit in the second quarter, holding Oxford to just three field goals. But that was the third phase. The Oxford special teams, particularly kicker Jack Tannehill, shined on Friday night. Tannehill went 3-for-3 on field goal attempts in the game, including two kicks from 44 yards out. He also threw a two-point conversion touchdown pass on a trick play early in the game.

“(Tannehill) is such a weapon,” Cutcliffe said. “It doesn’t come by accident. He works really hard at what he does. Also credit to Aubrey Bishop as the holder and Kortlen Wilfawn as a snapper. Those guys work really hard at their craft and do a great job being consistent.”

The scoring pace slowed into the second half, aided in part by a JJ Pegues fumble inside the red zone. Don’t worry – he made up for it by somersaulting his way into the end zone just one drive later. The really impressive special teams play continued into the second half, with the Chargers blocking Grenada punt in the end zone for a safety. Oxford would give up two late touchdowns, but not before the Charger second and third stringers had seen the field.

Defensively, the Chargers were dominant in the trenches. They shut down talented Grenada tailback Demarquese Gibson to his lowest output of the season and preventing quarterback Joshua Phillips from doing anything through the air. Midway through the second quarter, with Grenada putting together their best drive of the half offensively, it was the secondary making the big play to stop Grenada short. Byron Pearson intercepted Phillips, returning it near midfield to set up one of the Tannehill field goals.

“As a whole I think we played really well,” JJ Pegues said. “We just have to forget what happened last week (against Starkville). Coming into next week we have to be full-go. We know we have a cross-town crash next week so all eyes now are on them.”

For Oxford, it was their most balanced win of the season, finding success in every phase of the football game, and it couldn’t come at a better time. With the win, Oxford advances to 2-1 on the early season. Next week, they get the big one: No. 5 Lafayette in the Crosstown Classic. The Commodores beat Horn Lake handily on Friday night, winning 28-14.