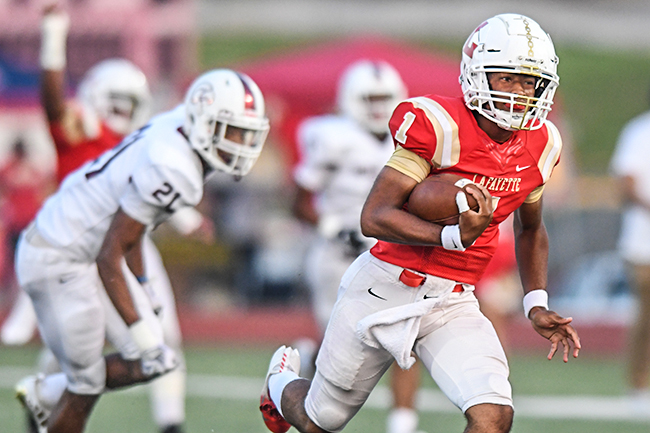 Friday was the first of three consecutive tests to prove if No. 5 Lafayette was worthy of its lofty ranking early in the season.

The Commodores passed with flying colors in their 28-14 win over defending Class 6A champion Horn Lake at William L. Buford Stadium.

What started out as a potential track meet by the Commodores (3-0) turned into a grind-it-out game the rest of the first half. On the third play of the game, sophomore quarterback Tyrus Carmichael-Williams broke free for a 61-yard touchdown run to give the Commodores the quick 7-0 lead.

From there, the game slowed down, with Horn Lake’s defense slowing down the Lafayette rushing attack.

“(Horn Lake) is such a good football team and they’re getting better by the snap and you can just see it,” Lafayette head coach Michael Fair said. “They’ve got a lot of young guys like us and we knew it was going to be a slug fest. We told our kids it was going to be like a heavyweight fight out here.”

Momentum seemed to shift toward Horn Lake (1-2) late in the first quarter. After the Commodores had a drive stalled due to a couple false start penalties, Horn Lake blocked a 28-yard field goal attempt.

The Eagles managed to find the end zone on their third possession when quarterback Nick Frampton found receiver Jaylen Lipscomb on 4 and 8 for the 11-yard touchdown catch. After a blocked point-after try the Commodores clung to a 7-6 lead at halftime.

The game continued its “slug fest” mentality until late in the third quarter, when the Commodores managed to pull the momentum back to their sideline for good. Randy Anderson scored on a six-yard run, which was set up by a 68-yard reception by tight end DB Bennett, to put Lafayette up 14-6 at the time.

Special teams once again came up big for Lafayette for the second straight week. Backed up deep in their own territory, Horn Lake muffed a punt and the Commodores recovered inside the Eagles’ 20 yard-line. Two plays later, Anderson scored again, this time on a seven-yard run.

“Special teams has been a huge emphasis for us,” Fair said. “The field goal that was blocked, you know that’s not like us. We’ve done a really good job this year, so we’ve got some things to fix.”

Anderson finished the night with 63 rushing yards and two touchdowns on 15 carries. He also had four catches for 37 yards. Williams completed 5-of-9 for 105 yards and rushed for 102 yards and a touchdown on 10 carries.

The defense continued its stifling play and put points on the scoreboard on Friday. They have held two 6A teams to 14 points in their last six quarters of play. In the third quarter, Frampton fumbled the ball and Trikyus Woodall picked it up for the 63-yard scoop-and-score. Tabias Brown also had an interception in the fourth quarter.

“Our defense is playing extremely hard,” Fair said. “They’re really sound and they’re starting to tackle a little bit better each week, which I’m excited about.”

Lafayette hosts rival Oxford next week in the 2019 edition of the Crosstown Classic. Oxford edged the Commodores with a last-second field goal last year.

Chargers run through Grenada behind balanced play from all-three…