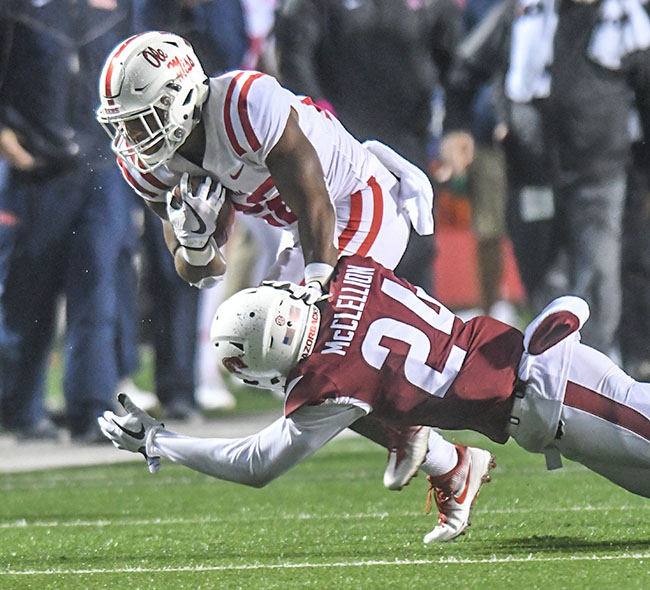 After a week one loss, Ole Miss returns home for their Vaught-Hemingway Stadium opener against Arkansas.

The way the schedule shapes out, this week two matchup was always the most important game on the Rebel schedule. After a week one loss, it holds even more weight.

That said, it’s an SEC game and the Rebels’ SEC opener. Ole Miss is favored by 6.5 points against the Razorbacks. It’s hard to imagine the game not being close.

Arkansas played two quarterbacks in their opener. Ben Hicks, a transfer from SMU, got most of the playing time (29 attempts vs. 5), but Arkansas veteran Nick Starkel saw some time as well. Matt Luke says the team will be preparing for both, but focusing on Hicks.

“I like their new quarterback. He does a good job and he understands the offense,” said defensive coordinator Mike MacIntyre. “He’s making checks and getting them in the right play. He’s getting the ball out quickly to the right receiver like Chad (Morris) would want. And then there’s (Rakeem Boyd), the running back, is an excellent player, powerful and fast.”

Arkansas ran the stretch play really well against Portland State, something that allowed Boyd to total 114 rushing yards at a clip of 6.3 yards a carry. Their senior tight end Cheyenne O’Grady, whom they use a lot in the red zone, didn’t play in week one, recovering from an offseason injury. However, MacIntyre said he is expecting him back against Ole Miss.

Really, the team just missed on a few big plays against Portland State that wouldn’t made the final score a little more palatable. Ole Miss needs to make sure they don’t hit on those this Saturday.

Defensively, Matt Luke is familiar with coordinator John Chavis – they spent two years together at Tennessee in the mid-2000s. Arkansas will play a four-man front against Ole Miss, similar to the one they saw last week against Memphis. They’ll play a good bit of cover one-man coverage with one high safety, also something Memphis ran a good bit of a week ago. Ole Miss will have to learn from their mistakes against that sort of defense.

“They have two seniors on that defensive line that are very, very stout. Their linebacker, Harris, seems like he’s been there forever,” Luke said. “They’re very, very good in the middle. And that’s the same thing offensively with their quarterbacks and their running back. So up the middle, they’re very good and have a lot of experience.”

History shows the game with Arkansas will be a tight one. Over the last four years, the games have been decided by 10 total points. With Ole Miss having a home field advantage, and it being their SEC opener, it’s the most important game remaining on the Rebel schedule, and it’s here.

Under the Radar Rebel to watch against Arkansas: Luke…