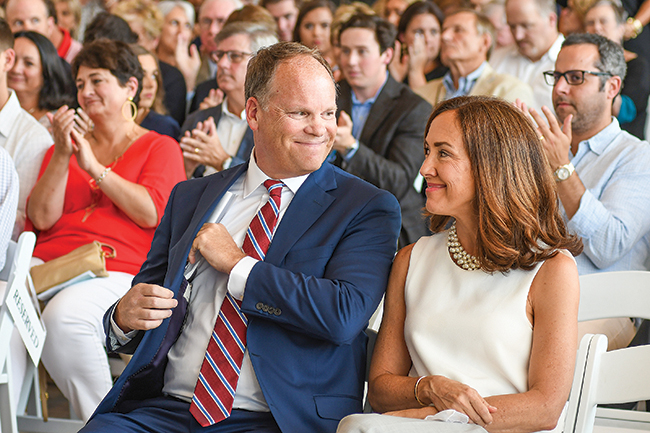 What started as a tragedy for one family has turned into hope for others.

The William Magee Center for Wellness Education was dedicated on Friday, providing a place to educate students on substance abuse and attempt to prevent another family from experiencing what the Magee family endured six years ago.

William Magee died from an accidental overdose in 2013. Prior to his death, Magee let his family know he had once succeeded in overcoming his struggle, and hoped to one day be able to help others who were battling substance abuse. Magee may no longer be able to help Ole Miss students himself, but his intentions will live on through the wellness center.

“I thank you so much for honoring our late son,” said David Magee, William’s father, during the dedication ceremony. “He told me the week before he died, I was with him in Nashville, and he told me he wanted to help people one day. He said, ‘I’m not strong enough, yet, but I want to help people one day,’ and you have helped him live and achieve that.”

The center, which held its grand opening on Friday, is located inside the new South Campus Recreation Center. Immediately upon walking inside, the center is to the left of the lobby.

David and his wife, Kent, have shared their son’s story of addiction and provided the initial gift that launched the fundraising campaign to strengthen wellness resources and support other Ole Miss students. The campaign began in 2017, and since then has raised more than $2.7 million in gifts and pledges.

“We’re changing the game in a caring manner to provide support,” Magee said. “It’s about giving students every advantage, every opportunity to live and learn and joyously celebrate at their best while in college.”

Next to the Magee Center is the Quintin and Ginger Whitwell Family Wellness Classroom. The classroom houses a demonstration kitchen and will be utilized in an academic capacity from 8 a.m. to 5 p.m. and programmed through the Magee Center in the evening, so students can attend a variety of programs to gain an understanding of basic cooking skills, healthy snacks and healthy and nutritious meal options.

During the ceremony, it was also announced the Institutions of Higher Learning approved the Magee Center to begin working toward becoming an institute to help those on a national and, eventually, on a global stage.