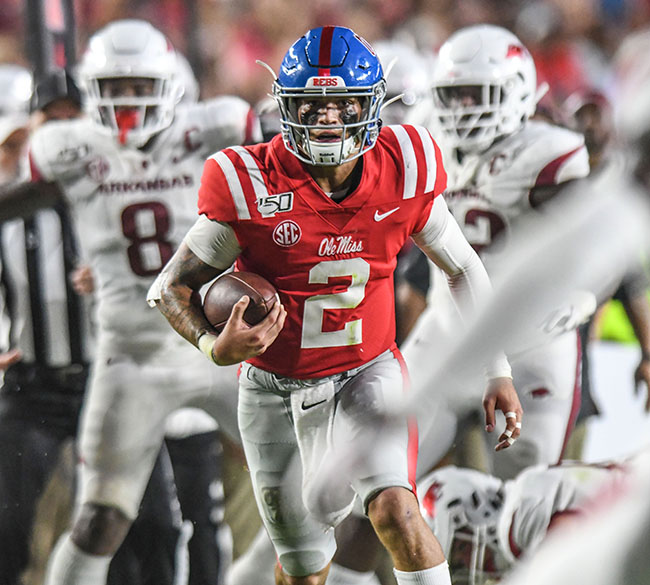 For the second week in a row, Ole Miss started slow. Unlike last weekend’s loss at the Liberty Bowl, they turned things up in the second half offensively.

The Rebels hung 485 total yards on the Razorbacks on Saturday night, pulling away late for a 31-17 win. It’s the first SEC opening win for Ole Miss since the 2015 Alabama game.

Ole Miss’ best offensive drive of the first half came early in the first quarter. Matt Corral topped a thirteen play, 85-yard touchdown drive with a rollout pass to Elijah Moore for the score. Compared to a week ago, Corral looked much more in control in his second-career start. Right from the get-go, Rich Rodriguez  made things easy on Corral, giving him some simple reads for easy completions. That confidence built from early successes showed late.

For the first time, the Ole Miss offense showed consistent flashes of what people had envisioned when they brought Rich Rodriguez into Oxford to run the until. They put up 31 points on an SEC team, regardless the caliber of SEC team. The systematic dysfunction of an offensive product that Ole Miss fielded a week ago in Memphis looked… competent, event confident and explosive at times.

Still, there were times where Matt Corral threw a pass behind Jerrion Ealy on a swing pass, a “fumble” for negative seven yards. He also fumbled on a fourth down. There were times where Corral missed throws and there were dropped balls. But as a whole, it looked like an offense capable of not just competing, but winning games in the Southeastern Conference.

A week after averaging just 2.4 yards per carry on the ground, Ole Miss accumulated 239 rushing yards against Arkansas. Scottie Phillips still lead the running backs in snaps and carries by a lot, but Jerrion Ealy and Snoop Connor were a bigger part of the game plan than a week ago. As a unit, Ole Miss rushed at a clip of 4.5 yards per carry in this one, lead by Phillips’ 130 yards. But really if we’re going to single out one guy on the offense, that honor goes to Elijah Moore. It was a career day for Moore, going for 130 yards and two scores, including a 46-yard touchdown to put Ole Miss up 14 in the fourth quarter.

Defensively, the biggest note came before the unit even saw the field. Starting inside linebacker, and Ole Miss’ most consistent returning defender, MoMo Sanogo had to be carted off the field on a punt play early in the first quarter. Sanogo was immediately ruled out with an ankle injury and no further update has been given.

A key sequence for the Ole Miss defense came early in the third quarter. With Arkansas driving, a chance to tie the game, Austrian Robinson stopped Razorback tailback Rakeem Boyd on a 4th and 2 carry on the Ole Miss 30. Robinson’s stuff forced the turnover on downs. Ole Miss immediately took the ball at went on an eight play, 71-yard touchdown drive to go up by 14 points.

Even without Sanogo, the Rebel defense allowed just 10 points (the final seven came on a fumble recovery). Filling in for the smartest Rebel defender was a combination of Donta Evans, Willie Hibbler and mostly Jacquez Jones. Ole Miss’ defense surely takes a step back without Sanogo on the field, but at least tonight they looked more than capable in his absence. Arkansas went for just 2.3 yards per carry in the game.

“We really were concentrating on stopping the run,” said defensive coordinator Mike MacIntyre. “Boyd’s a really excellent runner and we really never let him get started.”

Arkansas made it close at a point early in the fourth quarter. A questionable decision by Matt Corral on an RPO lead to an Octavious Cooley fumble. Arkansas returned the fumble for six points, cutting the lead to seven points. It was the only touchdown the Razorbacks would score until the closing moments, and Ole Miss would answer with consecutive touchdowns of their own to pull away.

Not to be a downer, but it’s logical to put some perspective on the win for Ole Miss fans: Arkansas stinks. A week ago, the Razorbacks won a football game. They beat Portland State, an FCS team, 20-13. But all things considered, a win is a win and Ole Miss just won their first SEC opener of the Matt Luke era.

“I thought the atmosphere was incredible. The energy in the stadium was the best it’s been in a long, long time,” Luke said. “I just want to thank our fans for showing up. I think we fed on that, especially late in the second half.”

With the win, the Rebels get to .500. They get to stay home for the next two weeks, playing Southeastern Louisiana a week from today and California the week after.