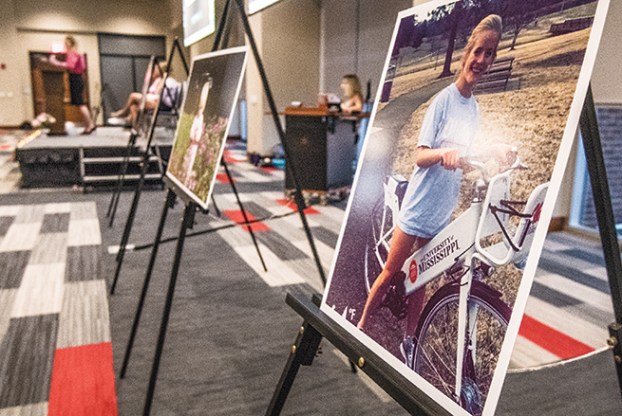 Photos of Alexandria "Ally" Kostial were on display during a memorial service at the Ole Miss Student Union in Oxford, Miss. on Sunday, September 8, 2019. (Bruce Newman, Oxford Eagle)

Ally Kostial loved to celebrate birthdays, especially her own – so much so that she would not just celebrate on her birthday, but instead make it a week-long celebration.

Wednesday would have been Kostial’s 22nd birthday, and to honor her tradition, friends and family held a memorial at the Ole Miss Student Union Ballroom on Sunday Evening.

The ceremony was titled “Celebrating Ally Kostial,” and featured all the things she loved to do. The event was put together by Hannah Chauvin, Elizabeth Brock, Morgan Hull and Clair Sigrist, just a few of Kostial’s closest friends.

Kostial was murdered on July 20 and found 30 miles away from the Ole Miss campus in Harmontown, near the Buford Ridge area. One of her former classmates sits accused of killing her with a charge of capital murder, awaiting trial.

Sunday night’s event began with a 30-minute yoga session, one of the classes Kostial taught at Ole Miss. Chauvin led the class in honor of her fallen friend.

Following the yoga class, the ceremony portion of the evening began. It was a time of reflection by friends and family of the impact Kostial had on their lives and the lives of others she encountered. Chauvin, Brock, Hull and Sigrist all shared stories and memories of Kostial.

During the ceremony, the Alexandria “Ally” Kostial Mind and Body Fund was announced in partnership with the University of Mississippi Foundation. The purpose of the endowment is to honor the life of Kostial and to provide income to support collaborative work between the William Magee Wellness Center education and the Violence Prevention Center at Ole Miss.

The foundation will also raise funds to go toward naming the Mind and Body Studio at the new South Campus Recreation Center the Alexandria “Ally” Kostial Mind and Body Studio, in honor of Kostial’s passion for teaching yoga and pilates. Chauvin originally began a GoFundMe page to raise money, with a goal of $150,000, but after speaking with University officials, the amount was cut in half to $75,000.

Kostial’s family was in attendance and her cousin, Kristi Kelley, spoke on their behalf.

“Ally shared 21 years of joy and positive spirit in St. Louis, Ole Miss, mission trips in Peru and South Africa and throughout the world,” Kelley said. “What a life she lived in a short time. She showed us that it’s not the length of life, but the depth of life. She had the ambition and ability to impact and influence everyone and anyone.”

The ceremony concluded as pink balloons, Kostial’s favorite color, were released on the Student Union balcony to commemorate her birthday.

What started as a tragedy for one family has turned into hope for others. The William Magee Center for Wellness... read more