How the Ole Miss defense will change without MoMo Sanogo 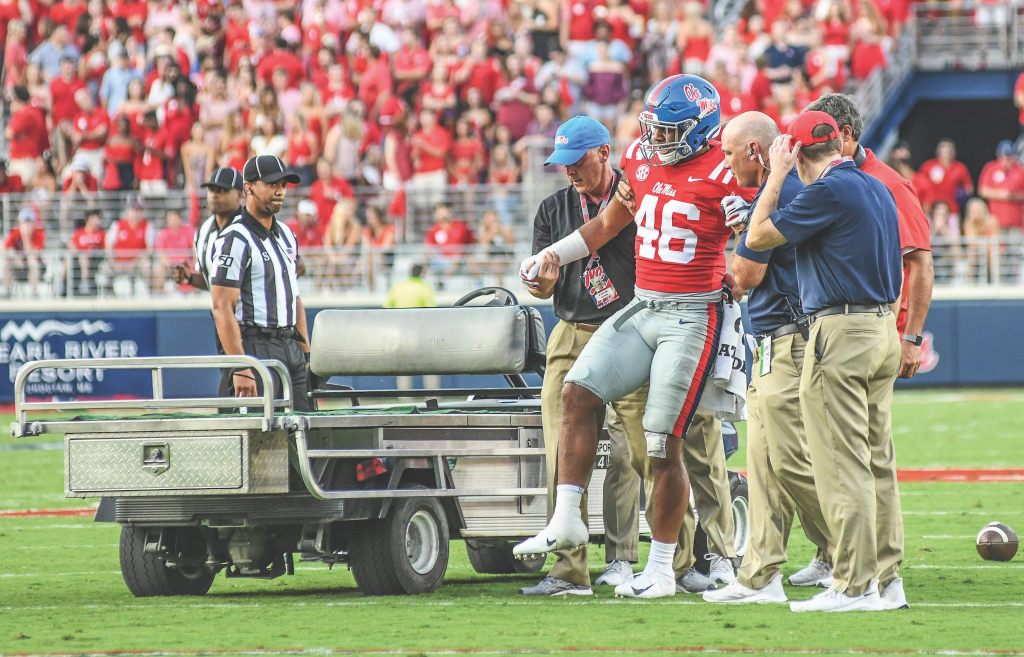 Ole Miss linebacker MoMo Sanogo (46) is carted off the field after being injured against Arkansas at Vaught-Hemingway Stadium in Oxford, Miss. on Saturday, September 7, 2019. Sanogo sustained a broken ankle and is expected to miss ten weeks. (Bruce Newman, Oxford Eagle via AP)

In all the years Mike Macintyre has patrolled a sideline on a college football field, he saw something on Saturday he had never seen before.

When MoMo Sanogo went down early in the first quarter against Arkansas, the entire defense went out to surround Sanogo, supporting him as he was carted off the field. It’s something MacIntyre was surprised by – it was different.

As tough as it was for the team in the moment and in the aftermath, they can’t let it linger. They have to move on. As Sanogo said himself on Twitter, it’s how he’d want it to be.

Now that Ole Miss knows they’ll be without their veteran in the middle of the defense, they have to figure out how to adjust without Sanogo out there.

“It changes a lot,” MacIntyre said. “He’s the voice of us in there and he’s a great leader… the main guy inside that will take those responsibilities is Willie (Hibbler).”

The good news is, inside linebacker is one of the deeper positions on the Ole Miss roster. It’s interesting, or at least noteworthy, that MacIntyre singled out Hibbler, later saying that the entire defense will have to pick up for Sanogo’s slack.

Hibbler, a senior, is without a doubt the veteran and most experienced of the remaining group. Lakia Henry, a junior college transfer, has been starting next to Sanogo. Henry has already impressed early, but will need to take on a bigger role. Really, the slack will have to be picked up by all four remaining inside linebackers: Hibbler, Henry, Donta Evans and Jacquez Jones.

Just one of the places #OleMiss is going to miss MoMo Sanogo. Jaquez Jones (10) overpursues and is too aggressive, Donta Evans (35) just driven out of the play… Rebels need guys in that ILB room to step up pic.twitter.com/qVjeNic7N8

“MoMo is like a brother to me. So when I first saw him go down, it hurt me,” Jones said. “I had to say a little, quick prayer for him. But knowing him, he’d want me to step up and play a role in this game.”

Even when Sanogo was playing, it was a rotation of five linebackers. Everyone had to know and be able to communicate the calls and checks. When he was out there, Sanogo would take those duties as the leader of the group. He’s still going to be around, having a successful surgery on Tuesday, but he’ll be around in a diminished capacity.

As far as scheme goes, nothing much will change for Ole Miss. Fans saw that for the rest of the Arkansas game. There were some things they need to sure up over the coming weeks, but the unit without MoMo Sanogo still held Arkansas to 10 offensive points and 61 rushing yards. It’ll be an adjustment, but one Ole Miss has but no choice to figure out on the fly.