“Nothing stays the same”: How Ole Miss is preparing for Southeastern Louisiana 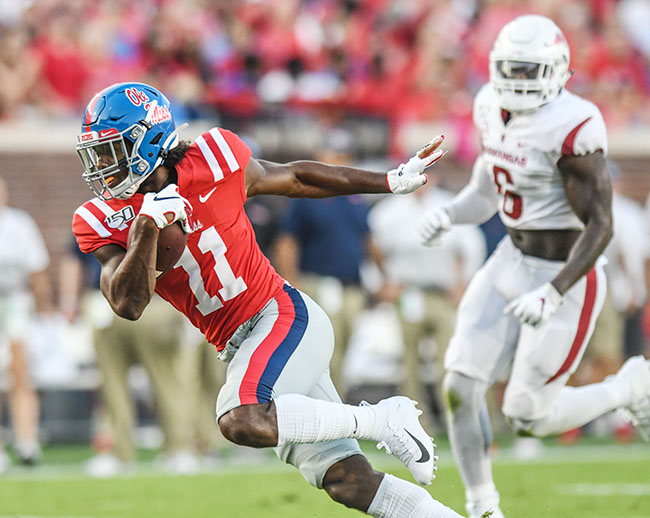 A large part of the message coming off of the Arkansas win has been consistent: The Rebels still have a lot of places in which they need to be better.

Home games against teams like Southeastern Louisiana aren’t sexy. However, they’re a good chance for the team to work toward that message of incremental improvement.

“We’ve talked a lot about ‘nothing stays the same,'” head coach Matt Luke said on Thursday. “You either get better or you get worse. The focus is to try and make the same jump from week two to week three as we did from week one to week two. We’re definitely a work in progress and we have to continue to get better. With an inexperienced team, every snap that you take, you have an opportunity to make that step and get better.”

Southeastern Louisiana has played just one game at this point. They opened up their season with a win over a nationally ranked FCS team, beating FCS No. 6 Jacksonville State 35-14. Due to Hurricane Dorian, their game in week two against Bethune-Cookman was cancelled. So, the Lions have had two weeks to prepare for the Rebels.

The two schools have only played once, with Ole Miss dominating the Lions 52-6 in 2009. This year, SELU has a chance to challenge the Rebels a bit, as they do some things on both sides of the ball that Ole Miss is yet to see this year.

“They have a lot of speed and a lot of weapons offensively,” Luke said. They’ll test us on the perimeter for sure. On defense, they do a lot of blitzes and moving. We have a huge challenge this week because they’re going to attack us differently.”

SELU wide receiver Juwan Petit-Frere was described by the Rebel coaching staff as “perhaps the fastest wideout we’ve seen.” Their starting running back, Devonte Williams, is an Indiana transfer; he’s also a very dangerous kick returner. Senior quarterback Chason Virgil does a great job of getting the ball out quickly to those speed guys on the edge. Last year as a junior, he led the Southland Conference in passing. Now he’s back for his senior season.

For Ole Miss, they’re hoping to get junior receiver Braylon Sanders back for this one. As a whole, they’ve been pretty healthy to this point in the early season. Sanders missed last week’s Arkansas game dealing with a hamstring injury. He’s yet to go full-speed this week. The Rebels seemed optimistic about his return this weekend, but there’s also no need to rush him back. With mainly question marks in the receiving core behind Elijah Moore, the return of the junior would be much-welcomed.

Ole Miss is set to kick off with SELU at 3 p.m. on Saturday at Vaught-Hemingway Stadium. The game is an SEC Network Alternate game, available for streaming online.

Q&A: What Oxford and Lafayette players are saying about…