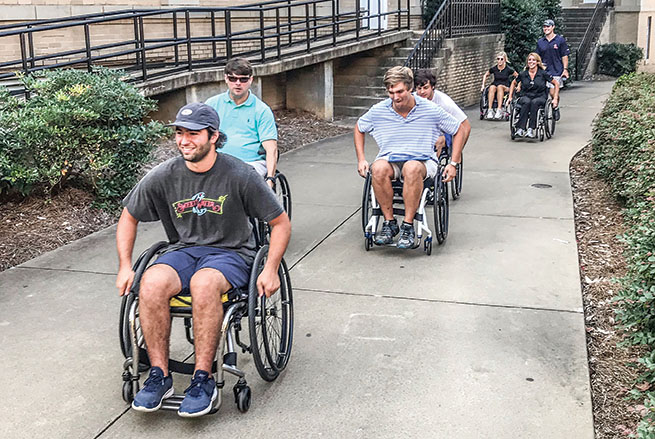 Cash Heath, front, leads a group of Ole Miss students who are using a wheelchair from the Ole Miss Student Union to the Lyceum Circle as part of the Come Roll With Me - Mississippi program, in Oxford, MIss. on Tuesday, September 10, 2019. (Jake Thompson, Oxford Eagle)

Growing up in a home with a parent who was a physical therapist, Reid Fracchia felt he knew – and had seen – everything when it came to patients undergoing neurological rehabilitation.

However, he quickly learned he did not, and is now making it his mission to help educate others.

The Ole Miss senior started the Come Roll With Me – Mississippi program, which is designed show young adults first-hand how individuals with physical disabilities go about their daily routines in a wheelchair. The program, originally titled “Come Roll With Me,” was created by Kathy Carver, who is a physical therapist in Alabama. Carver initially started the program to educate and introduce children who are homeschooled to the world of life in a wheelchair.

Carver’s goal was to bridge the gap between the able-bodied community and the disabled community in terms of communication, respect and appreciation. Fracchia had the same mission in mind, but wanted to mold the program toward individuals with whom he could relate. So, he contacted Carver and asked if he could start a program of his own in Mississippi. Carver gave her blessing.

Fracchia’s mother worked as a physical therapist at the Methodist Rehabilitation Center in Jackson for 22 years. He learned through her how physical therapy and assistive technology work hand in hand, and he is working on his B.A. in Biochemistry and will then enter medical school.

“I was like, ‘What a better way to open my mind to what’s going on than to start something like this?'” Fracchia said. “It kind of raises awareness, but right when I started it, I didn’t know how much I would get out of it… I thought having grown up (around my mother) in that field, that I kind of knew more than everyone else. Really, to my surprise, I’ve learned so much. It’s opened up my eyes.”

For the program’s presentations, Fracchia gathers a few wheelchairs, supplied by his mother, and a small group of people. He held Come Roll With Me – Mississippi’s most recent event on Tuesday on the Ole Miss campus with around five people, including friends from his fraternity, Sigma Nu.

The group gathered in front of Fulton Chapel and listed to Cameron Stubbs, who has used a wheelchair for 16 years. Stubbs suffered a cervical spine injury on March 10, 2003, while on spring break in the Bahamas with his friends. He spoke with the group about life in a wheelchair, and how his way of life changed on that March day. Having someone who uses a wheelchair speak to the group is a key part of the program, Fracchia said. He’s had someone different speak at all five of his events, which have taken place in Oxford and Jackson.

After Stubbs spoke, he led the group, who were also in wheelchairs, into the Ole Miss Student Union through the handicap entrances and showed them how someone in a wheelchair must navigate buildings with multiple levels and how they must adapt to a world not built specifically for them.

“Every single case is different,” Fracchia said. “We did one in April, same setup. Went through the same Union and stuff and (Stubbs’) story was totally different. His struggles were different. The overreaching theme I’m starting to notice with everyone is the independence that they’re getting from the chairs with the developing technologies that allow them to grow their independence.”

The group used the elevators, water fountains and even navigated sitting in the food court while using a wheelchair. The hour spent in the wheelchair was eye-opening for those who participated.

“There was so many little things that you would never think of,” Ripley Pugh, a junior at Ole Miss, said. “This whole conversation we had, we asked (Stubbs) so many things.”

Fracchia said he plans to hold more events during his final year in Oxford, and will also continue to hold them in Jackson. Once he graduates, he said he hopes his brother will take over and continue hosting events on the Ole Miss campus.