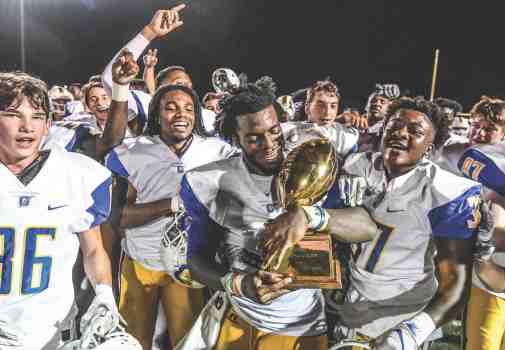 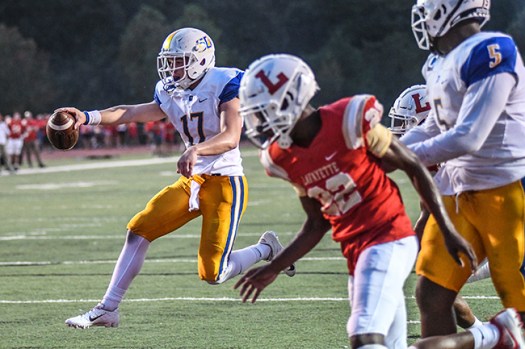 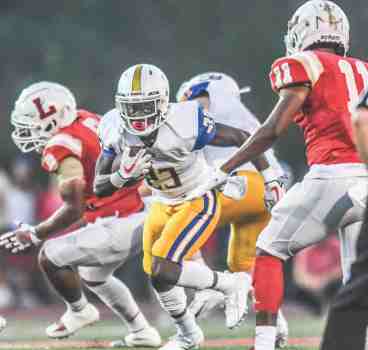 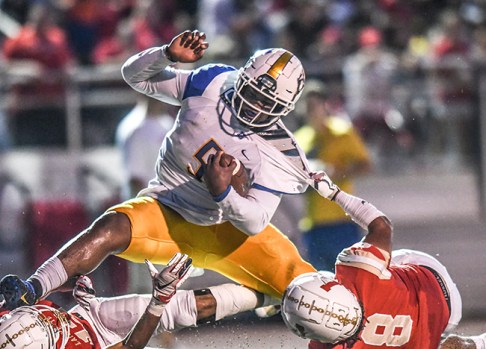 Lafayette opened 49th iteration of the Crosstown Classic with a false start, and in a way, it set the rhythm for the whole evening at William L. Buford Stadium.

Oxford (3-1) jumped on top of Lafayette (3-1) from their opening drive, scoring on every first half possession en route to a 46-7 win. They’ve now won three Crosstown Classics in a row.

“It’s cliché and I say it every week, but it’s the truth. We just wanted to be better tonight than we were last week,” Oxford coach Chris Cutcliffe said. “I was really proud of how we finished in the second half tonight compared to last week. We did a really good job of putting together a complete game.”

Where Lafayette’s main point of attack is finding different sources of rushing yards from multiple positions, it was actually Oxford’s quarterback, John Meagher, whose dual-threat ability was the most defining characteristic of the early portion of the game. Each of Oxford’s offensive touchdowns came on the ground – two from Meagher himself, the others from KJ Wadley and JJ Pegues.

Meager bulldozes in for the score.

25-0 Oxford. Can’t say anyone saw it being THIS ugly pic.twitter.com/IiCnCzukPQ

Offensively, Lafayette has a plan playing football, and they’re not shy about it. They’re going to pound the rock.

Lafayette knows that every other team knows they’re going to run the football. They rely on being able to generate yards on the ground when everyone in the stadium knows that’s what they’re trying to do. On Friday night, their offensive line simply was not able to generate enough of a consistent push against the Oxford defensive front to make that style of play effective.

“They played hard and fought off the blocks well,” Lafayette head coach Michael Fair said. “We should’ve executed a lot better early. Anytime you put the ball on the ground, throw two pick-6’s and can’t get out of your own way, it makes for a long night. Not to take anything away from them, because they have a good football team. But we did anything we can to help them as well.”

In total, Lafayette would amass 146 yards rushing, but needed 36 attempts to get there.

The Commodores didn’t earn a first down until the final drive of the first half, with the exception of an early one that came on an Oxford face mask penalty. Early in the third quarter, backed up against their own end zone, sophomore quarterback Tyrus Williams threw a ball right at Oxford linebacker Tristan Shorter. The interception went for an easy Oxford score.

Oxford linebacker Tristan Shorter, on the @ohschargers defensive performance and his pick-6: pic.twitter.com/ZLttxfunWM

“As soon as I dropped out to the hitch, he threw it right into my hands,” Shorter said. “We knew they were going to run the ball, but we knew they’d also try some trick plays. We stopped the run and once we were able to stop the run, that’s when they started messing up trying to throw the ball.”

Late in the game, with a lot of twos in for both units, Oxford was able to get another interception return for a touchdown. Lafayette got on the scoreboard late, a short plunge by Taylor Tarver.

As he has been the past few weeks, Jack Tannehill proved to be a big weapon for the Charger special teams. The Oxford junior hit from 47 yards out in the second quarter, setting his career high.

Ultimately, this was a game defined on both sides of the ball by Oxford. They won, and really were dominant, in every phase of the game. By the end of the third quarter, it was mostly second stringers going for both units.

The loss drops Lafayette to 3-1, the same record as Oxford. Both schools take next week off for a much-needed bye week.