Under the radar Rebel to watch against SELU: Jacquez Jones 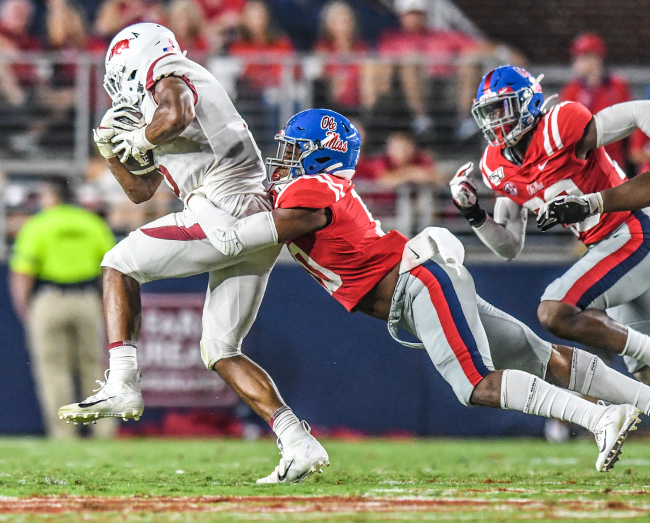 After playing in every game as a true freshman just one year ago, Jacquez Jones had sort of faded into the shadows to start the 2019 season.

Now with an injury to MoMo Sanogo, he’s being thrust back into a more critical role.

Jones saw the fifth most inside linebacker snaps to open the Ole Miss season. He was seeing the field, but not much. But when Sanogo went down early against Arkansas, he was suddenly the team’s leading tackler in the game.

“It just reiterates what we were talking about, with always being ready to play,” head coach Matt Luke said. “Jacquez wasn’t getting that many snaps but he kept preparing. It can happen at any position. You’re always just one play away from getting into the game, and he was prepared.”

Assistant coach Jeff Koons, in his first year with the Rebels, has really done a good job with that inside linebacker core. Jones had nine tackles against Arkansas, including half a sack and 1.5 tackles for loss. It wasn’t perfect by any means, but he was flying around the field.

It’s that sort of role that Jones was ready for. With the 3-4 defense putting two inside linebackers on the field together, and defensive coordinator Mike MacIntyre liking to rotate a lot of guys, Jones is now a critical role in that rotation.

“Everyone in the linebacker room prepares. When one guy goes down, the next person has to be ready to jump up,” Jones said. “Really, everybody has to step up. When MoMo’s not out there, everyone has to communicate. Everyone has to call the checks, it’s just what we have to do now.”

A three-star linebacker recruit out of Tuscaloosa, Ala., Jones immediately played a role when he stepped on campus a year ago as a true freshman. Despite playing in every game last year, and starting once, that Arkansas game when he came off the bench was statistically the best game of his Rebel career.

It was really simple to Jones. He’s not alone seeing the changes to the Rebel defense from a year ago to now. They knew early on it would be a much-improved unit.

“The first week of camp, I thought we could be pretty good,” Jones said. “Everyone knew what we were doing on the defense. I would say last year, some people were questionable. But now we know what we’re doing and the coaches are teaching us. We’re all bought in and ready to get better every day.”

Jones may not start Saturday. In fact, he probably won’t. But it’s that rotation of players that’s helped make this Ole Miss defense one of the best 10 in the nation through two weeks. Even coming off the bench, Jacquez Jones is in line for a lot more snaps moving forward in this Ole Miss.