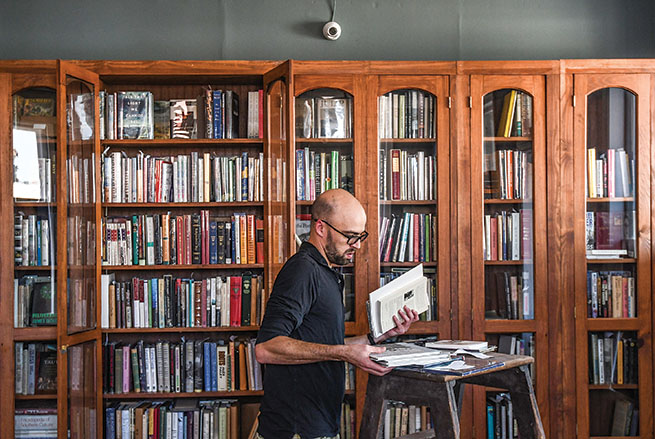 The idea to do a bookstore which features exclusively rare and antique books has been in “incubation a long time,” according to Howorth. He has always had those books in bookshelves off to the side or in his office in Square Books and at Off Square Books, but Howorth wanted a central location to house them, and others he’s accumulated over the years.

“I always kind of had this collection and sold them, but it was always a sideline,” Howorth said. “People would kind of look in my office but they wouldn’t want to go in there because it was not very welcoming. I would always tell people, ‘Come look at these and help yourself.’ Then, this space became available.”

The possibility to move back ‘home’ for Howorth became an option when attorney Kenneth Coghlan, who was previously using the space for his law office, told Howorth he was leaving Oxford. The building has been in Howorth’s family dating back to the late 1800s, and after buying it from his brothers and first cousin, he was able to move back in.

Seeing bookshelves full of books back in that space 33 years later is something Howorth said he has not been able to stop and fully appreciate just yet. Between creating another store and learning how the antique book business operates, the project has taken up much of Howorth’s time during this milestone year.

“It’s quite different from the other book business that I’m in,” he said. “Every item is unique. You’re not buying 10 or 20 or 100 copies from the publisher and getting them all in a box one day and scanning them with the thing and getting them in the system and getting them on the floor. Every book has to be described and appraised and priced. That’s not even thinking about doing a catalogue.”

Howorth is not going on this new endeavor alone. His son, Beckett, will be the primary person in charge of the store’s day-to-day operation, along with longtime Square Books employee Cody Morrison.

To help understand and acclimate himself to the world of antiquarian book dealers, Beckett attended the Colorado Antiquarian Book Seminar at Colorado College in July. The seminar is a convention made up of 40 to 50 antiquarian book dealers who are trained in the world of antique and rare books. Becket learned all aspects of how to run a rare and antique bookstore, from pricing the books, what to look for when appraising and all the unique aspects.

“It’s more about books as a physical object than anything to do with literature,” Beckett said. “That was an interesting aspect for me. I’ve been selling literature my whole life and now it’s a little different. …The fact that a book is more than the literature within it. It’s got history. It’s got a story to tell.”

There will be an area of the store with the more expensive books kept in locked cabinets, but the rest of the store will feature books sitting on shelves, similar to the other stores.

“You can find things that are interesting that are not expensive,” Richard said. “This ain’t no jewelry store.”

With national chain bookstores slowly disappearing from malls and shopping centers due to the advent of the e-book, Howorth has been able to not only keep his bookstore around for 40 years in essentially the same location, but also keep it thriving – so much so that he has added three other stores under the Square Books umbrella during that span.

Howorth said he did not understand the value of buying local until he went to Kroger one day as a child. Upon returning home, he was asked by his mother why he went there instead of the Jitney Jungle, where they knew the family who owned the grocery store.

“It’s always been challenging. It’s not any easier today than it was the day I opened,” said Richard. “It’s a complicated business but a really wonderful business because it’s interesting. …Oxford’s always been good about (embracing local businesses). Oxford had always been that way of a community of which the townspeople and the University are intertwined and it’s small enough, so everybody knows everybody. You support your fellow townspeople.”

Rare Square Books will tentatively be open from 11 a.m. to 5 p.m., but those hours could fluctuate, according to Howorth.