The Jerrion Ealy revolution is upon us, sort of 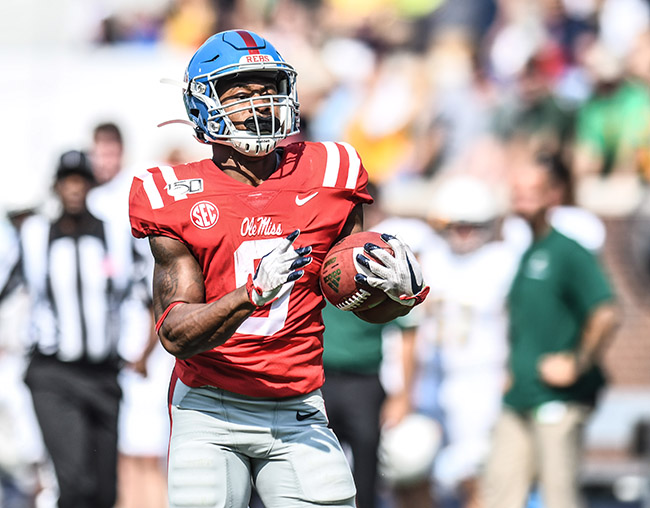 Mississippi running back Jerrion Ealy (9) returns a kickoff for a touchdown against Southeastern Louisiana at Vaught-Hemingway Stadium in Oxford, Miss. on Saturday, September 14, 2019. (Bruce Newman, Oxford Eagle via AP)

Walking off the field at the Liberty Bowl in August, Jerrion Ealy was essentially an afterthought.

The Rebel offense had just put together a 10-point day, one in which they ran for 80 total yards at a clip of 2.4 yards a carry. Ealy touched the ball just four times on offense.

They needed to change things, they needed more variety and they needed a spark. A little more Jerrion Ealy over the past two weeks has helped light that fire.

Ealy had his breakout game Saturday against Southeastern Louisiana, totaling 273 all-purpose yards and two scores, including a 94-yard kickoff return touchdown in the first quarter. His 273 all-purpose yards broke Dexter McCluster’s Ole Miss freshman record from 2006. Ealy looked explosive, dynamic and most surprising, powerful enough to run between the tackles.

“I’m just trying to run away from people that are running towards me. That’s all I do,” Ealy said. “I had no idea I (broke the record). I was like, really? Really? Me and Dexter, we’re from the same county, actually. Dexter’s from Leake County. I’m from Leake County.”

A Mississippi kid himself, Ealy is following in McCluster’s footprints. McCluster is actually The Godfather of one of Ealy’s cousins. McCluster still holds the Ole Miss all-time record for all-purpose yards with 324. Ealy laughs when asked about that second record, saying that’s not exactly in his control.

But this game was in part controlled by Ealy, and it’s one that’s been a few weeks in the making. Offensive coordinator Rich Rodriguez said after the Memphis game that he wanted to get a more balanced snap count at running back. The next game against Arkansas, Ealy saw the field for 15 offensive snaps and touched the ball seven times. Tonight, he was on the field for over 20 snaps, getting ten offensive touches. Every game, he’s provided a little more.

“He’s a dynamic playmaker and I think he will only continue to get better,” said head coach Matt Luke. “I think Jerrion ended up being the difference in the game… we have some talented running backs and they’re all a little bit different. So we’re going to try and get them as many touches as we can.”

Jerrion Ealy's first #OleMiss rushing TD caps a drive where he did literally all the work. 12:28 left in the half and he has 232 all purpose yards… that'll play pic.twitter.com/3AhDz75E2s

It was the first half on Saturday that showed what the Ealy can really do, and why Ole Miss fans had such high hopes for the five-star freshman. Up 7-3 midway through the first quarter, Ealy fielded a kickoff on the right side of the field on the Rebel six-yard line. Bursting to his left, Ealy went untouched, going 94 yards with unbelievable ease for the Ole Miss score. Just a handful of minutes later, early in the second quarter, Ealy led a two-play, 82-yard touchdown drive. He recorded each of those 82 yards on his own, a 52-yard run to set up the 30-yard touchdown scamper.

“The O-line did a very good job when I was in. They were getting on their blocks and staying on their track,” Ealy said. “That’s all I can ask for. That’s all they can do. When they do that, it’s just up to me to make the right decision up the hole and get loose.”

Growing up, Ealy said he actually wanted to play offensive line. He marvels at the ability of those guys to be so big, but also so athletic, he said. It’s not the sexy spot on the football field, but it’s actually the one he wanted to play the most. Therefore, he’s quick to credit their dirty work that often goes unnoticed.

With all this Jerrion Ealy talk, it’s important to remember that this is still Scottie Phillips’ backfield in Oxford. As good as Ealy was Saturday in his limited action, it was just that: limited action. On Saturday against Southeastern Louisiana, Phillips saw 28 offensive touches to Ealy’s 10. Phillips outgained Ealy just 109 to 101.

But Ealy is okay with being the second fiddle. He actually compares plays where the two of them are on the field together – something that’s been really dynamic for the Rebels the last two weeks – to crickets scattering when you turn on the lights. They can just go anywhere, and you really don’t know what to expect.

“That’s the fantastic part. It’s probably my favorite part about all of this,” Ealy said. “We have four running backs that can go out there and play. There’s no drop-off between any guy. It’s just phenomenal.”

Ealy is the future, and fans are probably going to continue to see him more and more, but Phillips is still the present. Against Southeastern Louisiana, Ealy was the dynamic force that everyone expected out of Jackson Prep. And his ever-increasing role is one of the more fun storylines to follow for the 2019 Rebel season. Ealy is earning every touch.