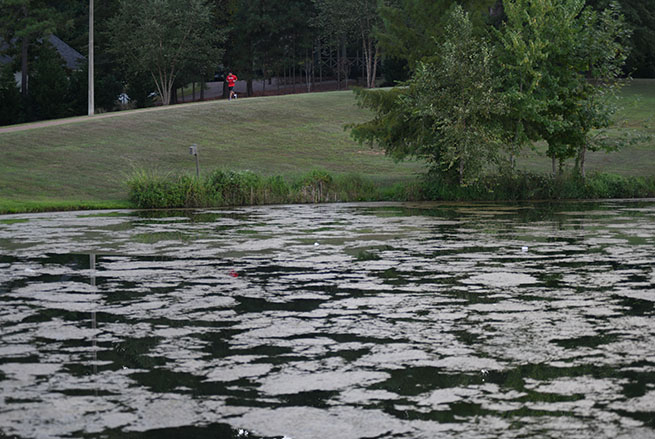 Algae being found in lakes and ponds around this time of year is a common occurrence, but due to the abnormally high temperatures this month, one local lake is experiencing a heavy outbreak.

On Tuesday, the City of Oxford announced Lake Patsy in Pat Lamar Park was experiencing a heavy algae bloom and has begun the process of treating it.

“Primarily due to the drought we’ve had, along with the heat, it’s just created an optimum situation for (the algae),” said Greg Pinion, the building and grounds superintendent for the City of Oxford. “Like (other lakes), it’s not got a lot of water changeover or movement, so it’s happening in lakes like that.”

The bloom is “steadily growing and increasing,” according to Pinion. He did confirm the algae is not the same toxic blue-green algae that has been killing dogs across the country this summer. The algae is not an immediate danger and will only affect anyone with an allergy to it.

Fish are stocked in the pond, so Pinion and his staff are working with a locally-contracted biologist to treat the algae bloom by putting a non-toxic color dye into the pond to treat the deeper blooms. The dye creates dark areas in the lake, which will “choke out” the sunlight and kill the blooms.

The biologist is measuring out how many carp per acre can be released into the pond. The carp, which will be released in groups over several periods, will eat the algae and help combat the bloom from spreading.

People are allowed to still utilize the walking trail around the lake, but residents are encouraged to stay out of the lake. The process is expected to take a full year to be completed.