ANALYSIS: Is Cal a Good matchup for Ole Miss? 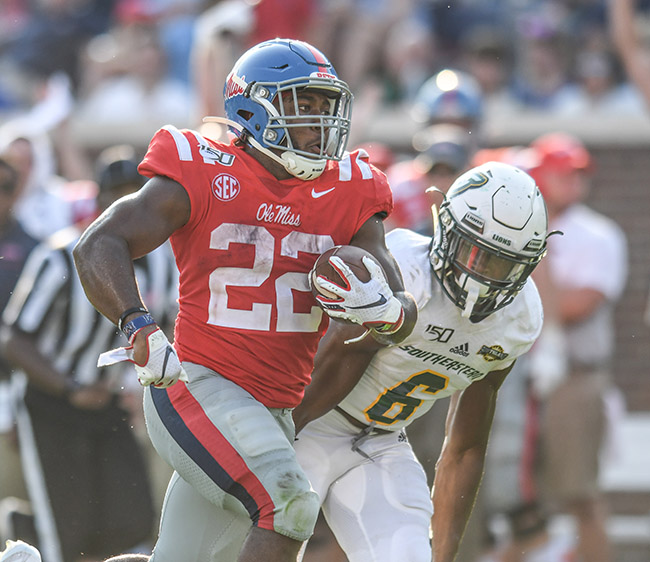 When Ole Miss welcomes No. 23 California to Vaught-Hemingway Stadium on Saturday morning, it will be the first time the Rebels have played an at-home, non-conference game against a ranked team since 2012.

Despite the fact that this Ole Miss team that no one totally has their heads wrapped around is playing a ranked, power-5 team this week, it’s an odd stylistic matchup that might actually be a large advantage for the Rebels.

Cal comes into Oxford 3-0, including a big road win over then-No. 14 Washington by a score of 20-19. Get used to that kind of score – every Cal game looks similar. They opened the season beating UC Davis 27-13 and last week being North Texas just 23-17. The Golden Bears thrive on low-scoring, defensive bloodbath football.

In a way, it’s a Cal team at the tail end of a similar transition to the one the Rebels are going through right now. Just a few years back, it was a high-flying air raid team led by the likes of Jared Goff, the 2016 No. 1 pick in the NFL draft and now LA Rams quarterback. They were one of the worst defenses in the NCAA in 2015. Now, in year three with Justin Wilcox at the helm, Cal is a team led by its nationally ranked defense. Offensively, they’re playing ball control.

Here’s the kicker that could work in Ole Miss’s favor: the vaunted Cal defense is predicated on their ability to stop the pass. Ole Miss’s offense revolves around their ability to run the football. The Cal offense has simply struggled, and they need to run the football to have success. Quarterback Chase Garbers has been overall unimpressive. For Ole Miss defensively, the ability to stop the run has been there all season, but where they’ve struggled is against the pass. On paper, the matchups are nice.

In the last two games, both wins, Ole Miss has run the ball over 50 times in each. It’s the way Rich Rodriguez likes his offenses to operate. This Saturday, they may want to do that even more – if Cal allows it.

“Well they can outnumber you,” Rodriguez said, in response to potentially running even more against Cal. “You can force someone to throw the ball by the numbers and just how many people you put in the box. So we have to be mindful of that, and that’s why you still have to be good in all the phases… but there’s no question for us, to be able to be successful, especially this weekend, we have the ability to do both.”

To this point in 2019, no one has been able to successfully do both (run and pass) against Cal. Looking primarily at the Washington game, Cal held Jacob Eason (widely regarded as one of the top QB prospects in the 2020 NFL Draft) to 18 of 30 passing for 162 yards and one interception. His QBR was 26.6. Only one quarterback, North Texas’ Mason fine (who opened the year by throwing for 383 yards and four touchdowns) has topped 200 passing yards against the Golden Bears. When Fine did it, he completed just 52.5 percent of his throws with a QBR of 23.9. That Cal pass defense is just special.

Typically, a good pass defense is centered on two factors: getting a consistent pass rush and covering well on the back end. With Cal, the pass rush is quite average. It’s the experienced, NFL-caliber secondary that terrifies opponents.

But where Ole Miss can really take advantage of Cal, offensively, is on the ground. Washington, a pass first team, ran the ball effectively against Cal. Their two running backs combined for 30 carries at a clip of 5.4 yards per carry. Scottie Phillips himself could see 30 carries, and that’s not even factoring in the 10 to 15 touches that Jerrion Ealy and Snoop Connor will probably see.

On the other side of the ball, Ole Miss’s strength is preventing what Cal does best. Broadly, Cal isn’t good at scoring points. It’s easy to look at games where they score just 27 against UC Davis and just 23 against North Texas (both at home) and think, ‘yikes.’ But the advanced numbers back that up – S&P+ ranks Cal as the nation’s No. 117 offense.

A week ago, Ole Miss struggled to stop any air attack, giving up 309 yards passing to SELA. But Cal quarterback Chase Garbers is coming off a game against North Texas where he completed 41 percent of his passes. It’s unlikely Garbers will be able to effectively penetrate the vulnerable Rebel secondary.

We’re not saying Ole Miss is going to beat a ranked Cal team on Saturday, but it is a strangely good matchup for Ole Miss to pull off the upset. And, at least according to Vegas, it wouldn’t really be an upset. Cal opened the week as two point favorites on the road, but at the time of writing, the line has moved all the way to the point where Ole Miss is now a two point favorite. If Ole Miss is to pull off the “upset,” it’ll be the first win over a ranked, non-conference team at Vaught-Hemingway Stadium since 1970.