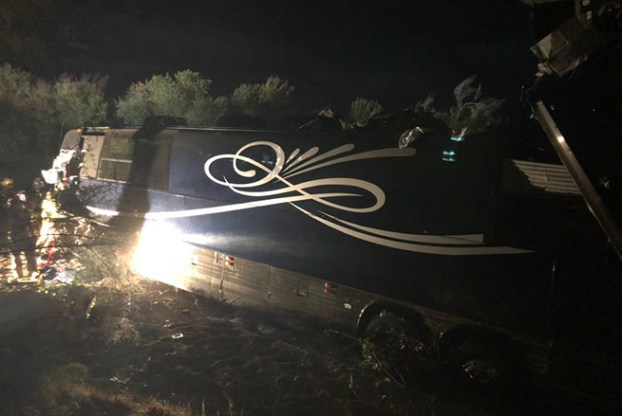 A tour bus carrying the road crew for Country Music star Josh Turner crashed off a California highway on Wednesday, Sept. 18, 2019. David Turner of Oxford was the lone fatality in the crash that injured seven others. (@CALFIRE_SLO/Twitter)

An Oxford musician was the lone fatality in a bus crash on Wednesday. A bus carrying the road crew for Country music star Josh Turner wrecked outside of Paso Robles, Calif. shortly after their show at the Vina Robles Amphitheatre.

The bus fell 80 feet off an embankment, leaving one dead and seven injured, according to the California Highway Patrol, who confirmed the number on Thursday morning.

Oxford’s David Turner, 64, died when the bus veered off Highway 46 near Shandon, Calif. just before midnight. The bus traveled around 20 feet off the road before plunging down the side, according to a KSBY News report.

Turner has been traveling with Josh Turner — there is no relation — for nearly 12 years as a member of the sound crew. Josh Turner and other crew members were traveling in a separate bus and were not injured.

David Turner, who was a Bruce native, had worked in the Country music industry for 40 years and had worked with other stars such as Conway Twitty, Hank Williams, Jr., Patty Lovelace and Tammy Wynette, among others.

Officials say the investigation is still ongoing to determine the cause of the crash. Turner is survived by his wife, Jamie Henderson, one daughter and two grandchildren.

Oxford and Lafayette rated among the state’s best school districts

The 2018-19 accountability results for Mississippi’s school districts were released by the Mississippi Department of Education on Tuesday and once... read more