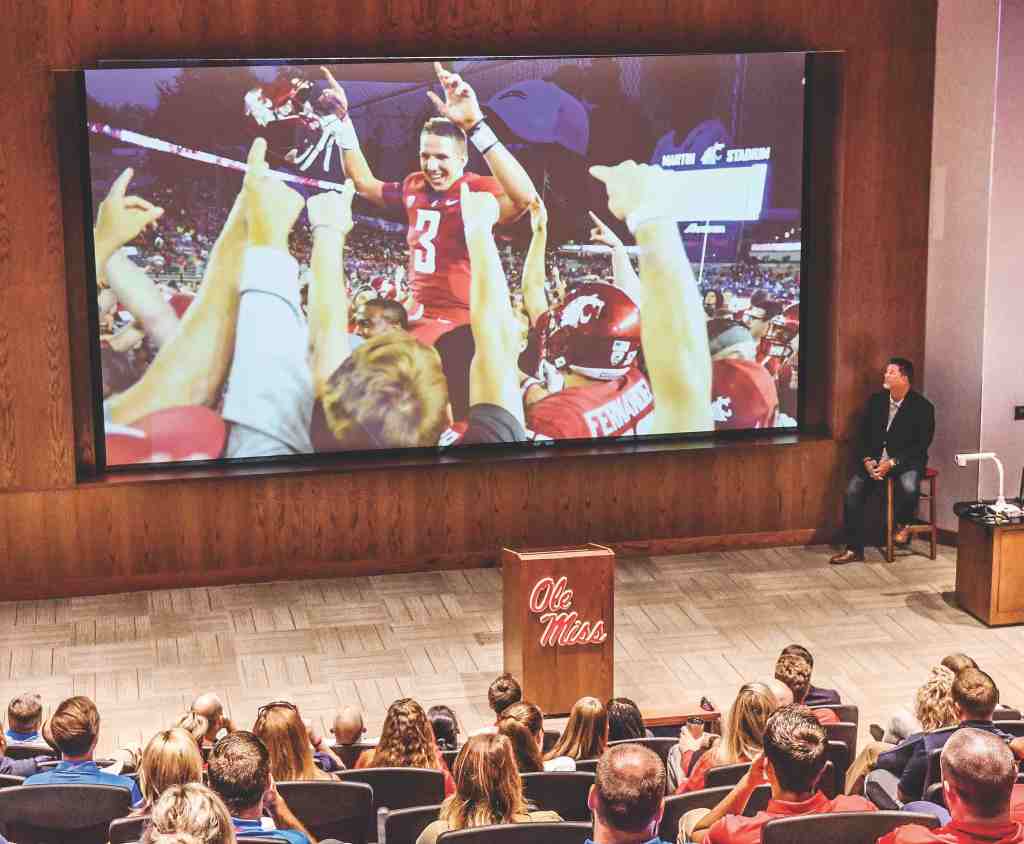 They lost their son to a battle that no one knew he was even going through, and now, Mark and Kym Hilinski are doing their best to make sure no one else has to experience that same pain and loss.

A sophomore starting quarterback at Washington State, Tyler Hilinski was found dead in his apartment in January 2018. The cause of death was found to be a self-inflicted gunshot wound to the head. Hilinski took his own life at just 21 years old.

The Hilinskis now spend their lives traveling the country, raising awareness and funds for mental health issues, specifically among athletes. That mission brought them to Ole Miss this week.

They operate a non-profit foundation called Hilinski’s Hope, with the goal of “Keeping Tyler’s memory alive and generating the funding necessary to support programs that will help destigmatize mental illness.”

For Kym, this daily effort is her “why” for getting out of bed every morning. Raising awareness of the issues her middle son suffered from behind closed doors, with none of his loved ones ever knowing. Wednesday, the two spoke to the entire Ole Miss athletics department about Tyler and adjacent issues of mental health.

“When we share Tyler’s story, what it does is it puts a face on mental illness. You look at Tyler and his picture, and he doesn’t look like a kid that’s suffering. If it can happen to Tyler, it can happen to anybody,” Kym said. “When we talk, it stuns people a little bit. We don’t want to scare them; that’s not the point at all. But there’s an authenticity that you can’t get from a practitioner. That’s what gets people to look more closely at people like (UM Athletics counselor Josie Nicholson) and what they’re doing.”

These sorts of ‘Tyler Talks,’ as they call them, began at Tyler’s university, Washington State. Idaho was the first program to reach out to the family to do this sort of presentation. Idaho head coach Paul Petrino had recruited Tyler, and the campus lies just a few miles from Washington State’s. Now, the Hilinskis estimate they’ve spoken at 20 or more schools across the nation, from Vanderbilt to Army, UCLA to Stony Brook.

Tyler’s youngest brother, Ryan, is now the starting quarterback at South Carolina. His oldest brother, Kelly, is in medical school. After finding out that Tyler had Stage I Chronic Traumatic Encephalopathy, commonly known as CTE, Kelly switched his specialty in medical school to neurology. It’s just one of many ways this family is doing everything in their power to remember Tyler.

CTE is a type of brain trauma that often results after years of playing contact sports. It’s a condition that is commonly found in college and professional football players, one that results in chronic headaches, mood swings and behavioral disorders that take a toll on an individual’s mental state.

Hilinski’s Hope in itself isn’t a big company – they joke that it’s really just Kym – and neither Kym nor Mark are mental health professionals. Mark works in technology and Kym is a retired attorney. What they really do is fund mental health training and travel, tagging along and doing Tyler Talks like they did at Ole Miss.

“What people really want, to be honest, is for us to come in and say ‘these are the five things that happened to Tyler along the way. And we missed three of them,’” Mark Hilinski said. “It’s athletics, they want a game plan. But it doesn’t work that way. So, we turned all of that energy into what we think is the biggest block – the inability to tell the people closest to him that he was suffering. It’s trying to break that stigma.”

And that stigma is a huge contributing factor here. Ole Miss linebacker MoMo Sanogo said that often, players get the wrong impression that they’re less of a man for seeking help when they’re going through things. It’s that stigma that Dr. Josie Nicholson, a counselor and sport psychologist working for the Ole Miss athletics department, spends a lot of her time trying to break down.

The NCAA, shockingly, has no requirements for schools to have any sort of mental health professionals available to athletes. They have what they call “best practices,” which recommend having a sport psychologist on staff, but none of these practices are required and often tend to be very non-specific. When Tyler Hilinski took his own life back in 2018, Washington State had one half-time employee who was expected to handle counseling services for the entire athletics department.

Ole Miss is really ahead of the curve in this regard. Currently, Ole Miss has two full-time, licensed mental health practitioners inside the athletic department whose services are available to athletes free of charge. If the athlete doesn’t think they’re a good fit with the counselors on staff, there’s a network around Oxford of others to whom they can be referred.

In addition, the department holds mandatory suicide prevention training for all staffers and mandatory mental health and resilience training for each athlete. Nicholson said depression and anxiety are the major issues players will come to her with, but just getting the players into her office is the key part.

“They don’t talk about it. And that’s kind of the problem around the nation. The guys don’t approach the subject, so it’s kind of put on the shoulders of those leaders of the team,” Sanogo said. “I told a couple of the guys that I went and saw Josie and it made me feel better about where I am. It’s just someone talking about it. For me, it’s whenever you see someone going through something, suggest seeing someone. Whenever you have gone through something and you got help, talk about how it helped you so people know it’s okay.”

Anyone who has an injury on the football team has to meet with Nicholson. The problem is, most of them won’t say anything about it or talk about it. Sanogo said he was comfortable sharing that he met with Nicholson – not just with teammates, but really anyone. In the midst of what could be a season-ending injury – Sanogo had surgery recently on a broken ankle suffered against Arkansas – he said he knew he needed that little help, someone to just talk to. As a leader on the Rebel team, he said he wants to be one of those guys helping to break down those barriers and that stigma.

For the coaching staff, head football coach Matt Luke described the Tyler Talk as “eye-opening.” All members on every coaching staff are trained by Nicholson in recognizing signs, helping them understand what they’re going through and being able to provide resources to players if they need them.

“The biggest thing is, it’s a reminder that parents are entrusting you with their most prized possessions, their children. Being a dad, you realize that. You just want to make sure you’re doing everything you can to help them,” Luke said. “It’s important for them to talk about these things openly. If they do have anxiety, it’s our job as a staff to make sure they know that they can get help and where to go and who to see.”

A big thing Nicholson said she likes to make others aware of is the impact of social media on mental health, specifically for these athletes in 2019.

Social media tends to suggest that everyone has it all put together. Everyone’s life on Instagram is perfect. But that’s just so far from reality. Nicholson said these feelings of imperfection are a big reason players don’t like talking about their struggles. Like so many other things in life, failing to talk about mental health struggles leads to a downward spiral of loneliness and isolation, a false sense that nobody understands what they’re going through.

“In this day and age of social media and anxiety, they get their self-worth based on their phones and the number of likes. They look at their phones right after games to see what people are saying about them,” Luke said. “They live with all that. I think it’s very important to realize that we have mental health people here at Ole Miss that are professionals and they don’t have to go through it by themselves. It’s important to put a priority on the mental health of the player.”

In a world where holding an audience captive for 30 minutes straight is nearly impossible, the Hilinski Family had a room of over 200 Ole Miss athletics staffers at their fingertips. No one was checking their phones or social media or thinking about the game plan for the upcoming weekend. When they spoke, it was both captivating and heartbreaking.

The Hilinskis provide a point of view that could be difficult to understand coming from a true mental health practitioner – real world pain. Real heartbreak. Real tragedy. Now, everything Mark and Kym do is focused on one goal, raising awareness of mental health issues so that no mother or father, no brother or sister, no team ever has to go through what they have been through.

“Look how much progress we’ve made with gender identity and (the LGBTQ community),” Mark Hilinski said. “Those are not easy subjects. We have pro athletes coming out and talking about stuff like that – mental wellness shouldn’t be any different.”

Under the radar Rebel to watch against Cal: Chuck…