Under the radar Rebel to watch against Cal: Chuck Wiley 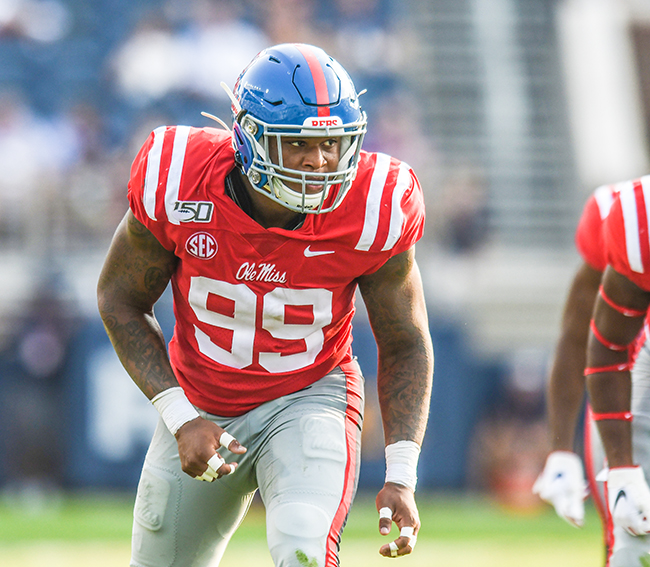 The offseason schematic change to Mike MacIntyre’s 3-4 defensive system stirred up a lot, meaning some players had to adjust to the challenges of a new set of principles at their position.

For others, like Charles ‘Chuck’ Wiley, the change meant playing a new position altogether.

Wiley had played in all but three games since he took the field for the first time as a redshirt freshman in 2017. Back in 2017 and 2018, Wiley was a defensive end. When MacIntyre arrived in Oxford, he was one of the guys that was asked to make that move to outside linebacker.

“Chuck is a really unique kid. The fact that he’s worked himself, he’s worked his way into getting better and better, and now he’s making big plays,” head coach Matt Luke said. “As a coach, you really like to see a guy earn it and really come a long way. He’s one of those guys, where I think moving to the 3-4 has kind of given him new life.”

And it’s not like Wiley is starting – he’s one of the first subs off the bench, but Sam Williams and Qaadir Sheppard are Ole Miss’s starting outside linebackers. Wiley is seeing a good bit of playing time on a defense that likes to rotate players to stay fresh, but his production has really stepped up in that new, reserve role.

“It’s a lot more straightforward for me. I get to use my athletic ability and just my athleticism overall more at outside linebacker,” Wiley said. “It took about two or three weeks in the spring (to adjust). After that, everything was just getting better week by week… All I have to do is go one-on-one against a tight end. I refuse to let a tight end block me.”

Wiley almost seemed relieved when talking to media on Wednesday. “The hard work has paid off” was a phrase he echoed three times.

He’s part of one of the deepest position groups on the Rebel team. They’ll play at least four outside linebackers against Cal on Saturday, with Luke Knox and Wiley likely coming in for relief duties for Williams and Sheppard. But when a player can get the sort of bench production that Wiley has brought through three games, that helps out the whole unit.